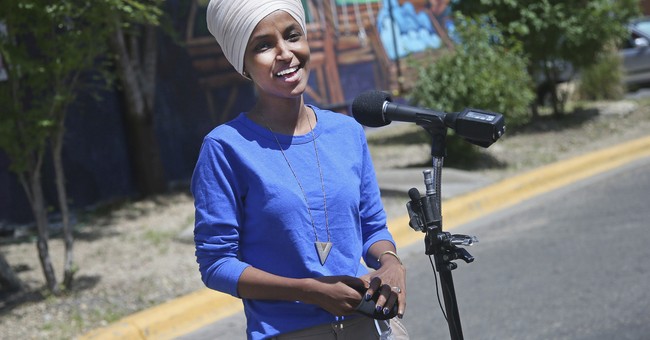 Rep. Ilhan Omar (D-MN) took the opportunity to once again reference 9/11. As if that weren’t bad enough, she did so on Thursday night, hours after an attack in Kabul which resulted in the death of 13 American service members.

The squad member herself reminded all of Twitter in a now deleted tweet that she made remarks about that solemn date in March 2019 as a day when "some people did something."

Sure enough, this tweet from @IlhanMN has now been deleted. pic.twitter.com/LmdfJJ1Ve9

Why did she tweet this. Tonight of all nights. pic.twitter.com/3XguWfkYX2

Why did you @IlhanMN post this picture of the Twin Towers on the day we lost 13 brothers in arms?! This is a clear sign of your character. #NeverForget pic.twitter.com/kmRZzhEECz

Further, she actually doubled down on the remarks when Nicholas Haros Jr., criticized her in a speech he gave at Ground Zero, His mother, Frances, was one of the thousands who died on 9/11. The congresswoman and Haros Jr. more or less left it on a better note, after Omar was repeatedly called out for it.

And it's also hardly just "the right’s reaction."

In addressing the congresswoman's remarks about 9/11, Margaret Brennan, the host of CBS' "Face the Nation" in an episode from September 15, 2019, asked Omar "do you understand why people found that offensive?"

Her response was rather lackluster, considering there were several uses of "but" in it:

I mean so, 9/11 was an attack on all Americans. It was an attack on all of us. And I certainly could not understand the weight of the pain that the victims of the- the families of 9/11 must feel. But I think it is really important for us to make sure that we are not forgetting, right, the aftermath of what happened after 9/11. Many Americans found themselves now having their civil rights stripped from them. And so what I was speaking to was the fact that as a Muslim, not only was I suffering as an American who was attacked on that day, but the next day I woke up as my fellow Americans were now treating me a suspect.

Democratic Rep. Max Rose, an Afghanistan vet, on @IlhanMN statements: "This is insensitive, and it's offensive." pic.twitter.com/sutoAfdhML

The congresswoman tweeted once on Thursday about the terrorist attack.

Today's terrorist attack on Afghans and U.S. service members was horrific, yet another reminder of the terror the people of Afghanistan continue to face.

Now is the time to redouble our evacuation efforts and do everything we can to get people out who are most at risk.

It's worth reminding that Rep. Omar has a history of doubling down on her incendiary remarks. In June, she said during an interview with CNN's Jake Tapper that "I don't" when asked if she regretted equating Israel and the U.S. with the Taliban.

We must have the same level of accountability and justice for all victims of crimes against humanity.

We have seen unthinkable atrocities committed by the U.S., Hamas, Israel, Afghanistan, and the Taliban.

I asked @SecBlinken where people are supposed to go for justice. pic.twitter.com/tUtxW5cIow