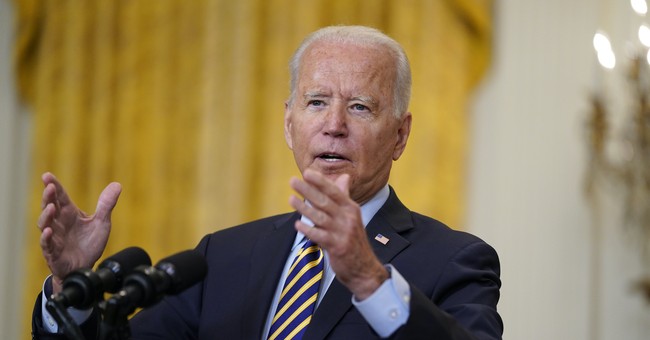 A particularly memorable moment of the town hall came when a recent college graduate referenced Biden's own hyperbolic words condemning Republican states and their voting laws.

The graduate also claimed "you and congressional members of your party have done little to actually stop these assaults" and went on to ask "If these efforts are really the most dangerous in our history, isn't it logical to get rid of the filibuster so we can protect our democracy and secure the right to vote?"

Biden doubled down on his past attacks, reiterating "I stand by what I said" and phrasing it as how "never before has there been an attempt by state legislatures to take over the ability to determine who won... That's never, ever, ever, ever, ever, ever, ever been tried before. This is Jim crow on steroids, what we're talking about," he said.

On the filibuster, Biden gave an answer which is likely to continue angering those who say he's not doing enough for voting rights. "You have to stand there and talk and hold the floor. You can't just say it now," he said about his support for the talking filibuster. "What I don't want to do is get wrapped up right now in the argument whether or not this is all about the filibuster," he would go on to say.

"There's no reason to protect it other than you're going to throw the entire congress into chaos and nothing will get done, nothing at all will get done. And there's a lot at stake," he also said.

Nevertheless, when being reminded that President Barack Obama, who Biden served under as vice president, regarded the filibuster as. a "relic of Jim Crow," Biden affirmed that "it is."

When Lemon asked "why is protecting the filibuster, is that more important than protecting voting rights, especially for people who fought and died for that," Biden went on to answer "no, it's not" and once more issued a call for Congress to pass the For the People Act and the John Lewis Voting Rights Act.

The president claimed he wanted to "bring along Republicans who I know know better," when it comes to such legislation, though the For the People Act has received no Republican support.

There were more memorable moments.

When answering one of the very first audience questions, to do with "medical misinformation," Biden referenced his own claim from last Friday that Facebook "is killing people," even laughing about it during the town hall when joking "you may have heard, I never get myself in trouble as you know, politically..."

The president went on to answer that "you may have heard that I was critical of some of the things that were on Facebook and I was attacking Facebook. I wasn't attacking Facebook. There was a report out saying that something like 45 percent of the overwhelming disinformation on Facebook comes from 12 individuals. I said they're killing people. Those 12 individuals, that misinformation is going to kill people. Not a joke. Not a joke."

"So what we're trying to do is use every avenue we can, public, private, government, non-government to try to get the facts out, what they really are," Biden said, before also making a reference to Fox News.

"And one of the things, doc, that's happening that I'm feeling better about, I'm not being a wise guy now, you know, one of those other networks is not a big fan of mine, one you talk about a lot, but if you notice, as they say in the southern part of my state, they've had an altar call, some of those guys. All of a sudden they're out there saying, let's get vaccinated. Let's get vaccinated. The very people before this were saying -- I shouldn't make fun of it. That's good. It's good. It's good. We just have to keep telling the truth," he said.

Biden also referenced his 2020 presidential campaign is that he said "we've got to restore faith in government" and referred to Lemon as "one of the most informed journalists in the country" when it comes to how Lemon knows "the criticism I got when I said I want to unite the country."

Later in the program, Lemon reminded Biden that Republicans have referred to him and the Democratic Party as anti-party, which Biden dismissed as them "lying."

Biden even claimed that "I don't know any community, particularly the communities that are in the most need and the poorest and the most at risk, that don't want police." The president is either lying or more senile than we thought, considering members of the squad, who are elected as Democrats, have been vigorously calling for defunding the police.

Members such as Reps. Rashida Tlaib (D-MI) and Cori Bush (D-MO) have made it all too easy to rebut the likes of Richmond, Wallace, and Jen Psaki.

We're going to defund the police and refund our social services.

Don’t like this idea? Well, we don’t like dead Black & Brown bodies & broken families at the hands of those sworn to protect us.

The police have failed at fixing themselves—so we're going to do it.

When it comes to this unity message, perhaps if Biden didn't repeat such claims as ones where the opposite political party was engaging in "Jim Crow on steroids," and likening to political divisions to what they were during the Civil War, then Biden and his administration wouldn't face such serious backlash, criticism, and distrust.