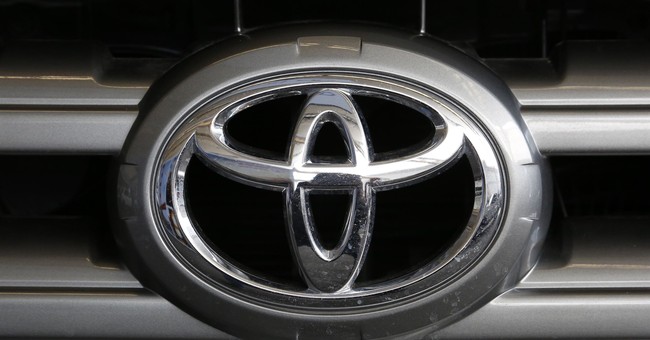 On Thursday morning, word came out that the rabidly anti-Trump Lincoln Project was targeting companies that dared to donate to Republicans, specifically those who voted against certifying the 2020 election results. By Thursday afternoon, their first victim, Toyota, had already caved.

A Thursday morning statement from co-founder Reed Galen made reference to "the Sedition caucus and its enablers."

Lincoln Project co-founder Reed Galen spoke to punishing Toyota in a Thursday morning statement. According to Riley Beggin with The Detroit News:

"The Lincoln Project will not sit by and watch as companies like Toyota — companies that have benefited from America’s economic strength and freedom — give money to politicians who are working to overthrow that same system," Lincoln Project co-founder Reed Galen said in a statement Thursday morning. "This is no longer a fight between two political parties or entrenched interests. It is no less than a fight to preserve American democracy."

The Lincoln Project ad aimed at Toyota is slated to be the first in a series that would run in markets relevant to the company it's targeting, the organization said. The Toyota ad would run on Fox Business and CNBC in Plano, Texas, near the company's American headquarters and in New York City, and digitally near the top 20 Toyota dealerships in the U.S. Comcast in Washington, D.C., declined to air the commercial, arguing it didn't meet their guidelines, t [sic]

As Toyota confirmed to the outlet:

"Toyota is committed to supporting and promoting actions that further our democracy. Our company has long-standing relationships with Members of Congress across the political spectrum, especially those representing our U.S. operations," spokesperson Edwar Lewis told The Detroit News via email.

"Our bipartisan PAC equally supports Democrats and Republicans running for Congress. In fact, in 2021, the vast majority of the contributions went to Democrats and Republicans who supported the certification of the 2020 election. We understand that the PAC decision to support select Members of Congress who contested the results troubled some stakeholders. We are actively listening to our stakeholders and, at this time, we have decided to stop contributing to those Members of Congress who contested the certification of certain states in the 2020 election."

Earlier coverage from Joseph Choi at The Hill, before the company was reported to have changed course, references past comments from Toyota in defense of their political contributions:

"Toyota supports candidates based on their position on issues that are important to the auto industry and the company. We do not believe it is appropriate to judge members of Congress solely based on their votes on the electoral certification," Toyota has said in defense of its donations.

While the Lincoln Project would not tell The Detroit News when asked what other companies it plans to target, and did not immediately respond as to if they will pull the ads targeting Toyota, spokesperson RC Di Mezzo did tell the outlet in an emailed statement that "The best I can say is: We're just getting warmed up."

Members of Congress have also voted not to certify past elections where Republicans won, including the 2000, 2004, and 2016 elections.