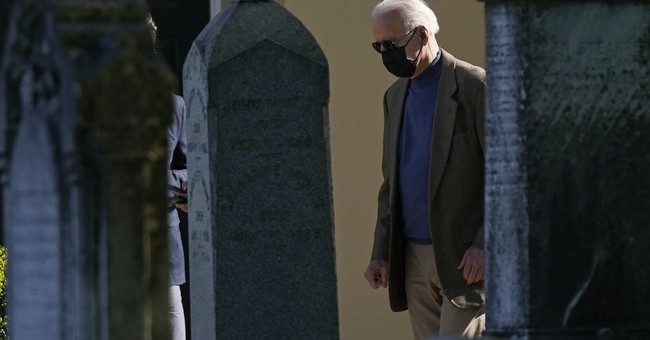 Earlier on Friday, as was reported, the United States Conference of Catholic Bishops (USCCB) voted to pass several action items at their virtual conference, one of them being a teaching document clarifying communion. That action item received great and often misunderstood attention, as it will discuss whether such public pro-abortion Catholic figures, including President Joe Biden and Speaker Nancy Pelosi (D-CA) are considered unworthy to receive communion. President Biden was asked about the vote today.

President Biden on whether Catholic bishops will vote to deny him communion for his pro-abortion policies: "I don’t think it’s going to happen." pic.twitter.com/ytuoUfxGJQ

"The Catholic bishops are moving on this resolution that would prevent you and others that have supported abortion from receiving communion. Are you concerned about the rift in the Catholic Church and how do you feel personally about that," a reporter asked.

Other Democratic Catholics, however, were more outspoken about the news.

NEW: 60 Catholic Democrats in the U.S. House of Representatives issued a "Statement of Principles" with a message to U.S. bishops that "the weaponization of the Eucharist to Democratic lawmakers for their support of a woman’s safe and legal access to abortion is contradictory". pic.twitter.com/IeR3gSbzDJ

The very premise of the letter is wrong, as every part of it is a cherry picked part of the Catholic faith and teachings of the Church, even though the signatories tout their faith and should know better.

Not only is the Church unequivocally against abortion, but it teaches that those who are "conscious of a grave sin" should not receive communion unless they have gone to confession first. Abortion is, in particular, one of the gravest sins according to the Catholic Church.

There is one particularly hypocritical part of the letter, though, towards the end. Emphasis is mine:

To pursue a blanket denial of the Holy Eucharist to certain elected officials would indeed grieve the Holy Spirit and deny the evolution of that individual, a Christian person who is never perfect, but living in the struggle to get there.

It is true that "a Christian person is...never perfect." What grieves the Holy Spirit, though, is abortion. Most of all, though, it is clear that these signatories are not indeed "living in the struggle to get there," because of their continued stance on abortion.

Virtually all of the signatories are pro-abortion and even support getting rid of the Hyde Amendment, other than Rep. Henry Cuellar (D-TX). Hyde protects American taxpayers from having to fund elective abortion. These protections were purposefully left out of the American Rescue Plan Act which Biden signed into law in March, and have also been purposefully left out of the $6 trillion budget proposal.

If such signatories indeed remain pro-abortion, then they perhaps should be more open as to how they have chosen their political positions over abiding by Church teaching, which could very well carry consequences.

Perhaps no one was more openly flagrant about disregarding core teachings of his faith than Rep. Ted Lieu (D-CA).

Dear @USCCB: I’m Catholic and you are hypocrites. You did not tell Bill Barr, a Catholic, not to take communion when he expanded killing human beings with the death penalty. You are being nakedly partisan and you should be ashamed. Another reason you are losing membership. https://t.co/kpIYRolnHD

Dear @USCCB: Are you going to deny communion to Catholics who:

-Had an abortion?
-Are divorced but didn’t get an annulment?
-Happen to love another human being of the same sex?

You should be deeply ashamed for politically weaponizing the sacred sacrament of Communion. https://t.co/N53FeJbYwC

Next time I go to Church, I dare you to deny me Communion. https://t.co/bUmiyJ8TtH

For all the claims that the bishops are weaponizing the Eucharist, it's hard to think of a more gross form of weaponization than a tweet flaunting one's disagreement with the Church.

As an act of love, Rep. Lieu's bishops should speak to him, even as Cardinal Wilton Gregory of the Archdiocese of Washington has made it clear President Biden is welcome to receive communion, and will likely say the same about the congressman.

Rep. Lieu represents the 33rd district of California, which is in Los Angeles, under Archbishop José H. Gomez.