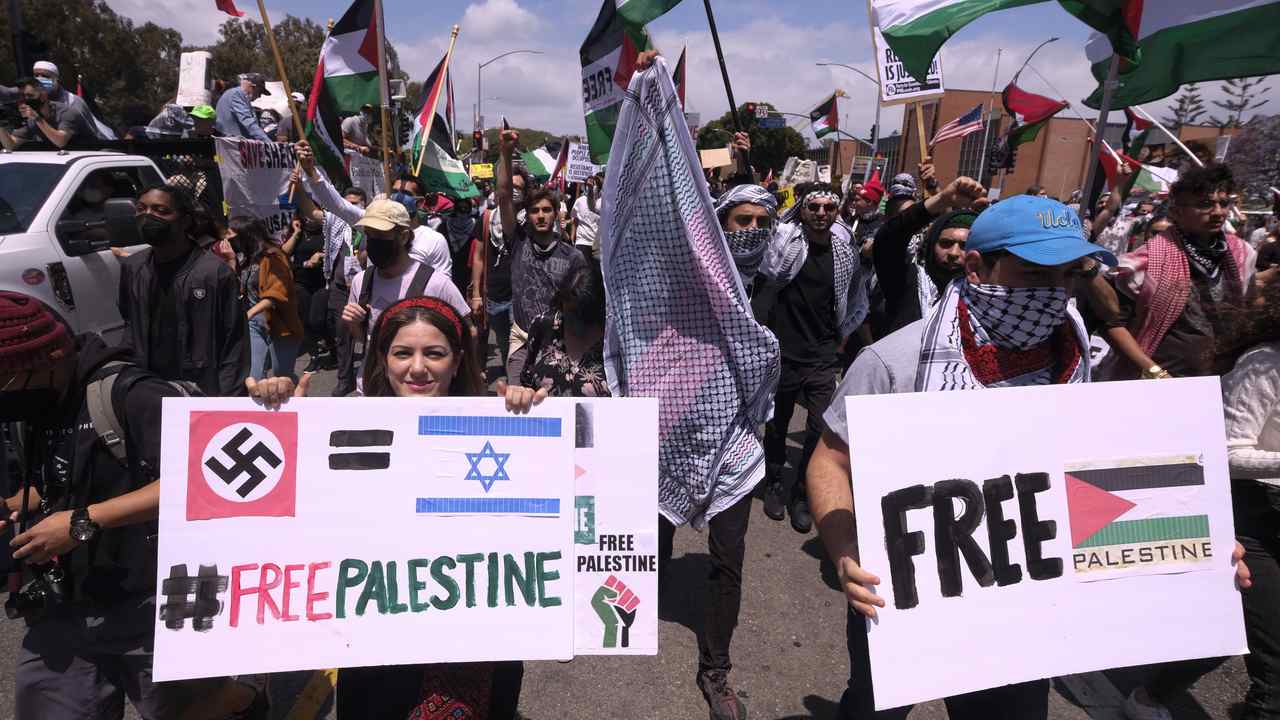 On Wednesday, Zack Beauchamp wrote something for Vox which was a bit of a head-scratcher to many, as you can see from reactions over Twitter. "What’s behind the anti-Semitism surge in the US," his headline read, with the sub headline claiming "Violent anti-Semitism spiked in America during the Israel-Hamas war. And we don’t know why."

Violent anti-Semitism spiked in America during the Israel-Hamas war. And we don’t know why. https://t.co/6QNoqXj1Z7

The piece in part begins with Beauchamp sharing that he's Jewish, along with an introduction to the attacks Jews are facing in the streets of America:

I regularly wear a kippah, a traditional Jewish head covering. It’s people like me, Jews who anti-Semites can readily identify, who have been targeted by high-profile attacks in cities like New York and Los Angeles in the past few days — beaten while walking down the street, attacked while out to dinner, and even assailed by fireworks tossed out of a car.

From there, he goes on to reference but also raise questions with data from the Anti-Defamation League (ADL):

These attacks appear to be linked to the recent flare-up in fighting between Israel and the Palestinian militant group Hamas. In some cases, the perpetrators waved Palestinian flags or shouted pro-Palestinian slogans. The Anti-Defamation League (ADL), a Jewish civil rights group, found preliminary evidence that anti-Semitic incidents, ranging from harassment to vandalism to assault, increased by 75 percent during the recent conflict.

The ADL’s data has some problems: It might be overstating the current level of anti-Semitic animus. But the upsurge in anti-Semitic assaults linked to anti-Israel sentiment, in particular, seems new and different, and it is not something that typically happens in the US during fighting between Israel and Hamas.

“The violence ... is one of the things that make this go-around a little bit different,” Oren Segal, the vice president of the ADL’s Center on Extremism, tells me.

What’s less clear is why these incidents are happening.

It's puzzling to know how it could be "less clear," when Beauchamp himself acknowledges that "In some cases, the perpetrators waved Palestinian flags or shouted pro-Palestinian slogans."

Beauchamp's piece is over 2,000 words. I read it in its entirety, not just the Twitter reactions. Yet in fairness of such tweets, Beauchamp does stick to this claim that we just don't know.

This suggests that the ADL’s current numbers aren’t merely a reflection of an overly expansive definition of anti-Semitism. But it also poses a difficult question: Despite the toned-down rhetoric at mass rallies, why does there appear to be a link between the conflict in Israel and the anti-Semitic violence in America?

In LA, the attackers — who drove to a specifically Jewish neighborhood to find Jews to hurt — were flying Palestinian flags. In Times Square, the violence grew out of a pro-Palestinian protest. In Florida, the attackers yelled, “‘Free Palestine, f*ck you Jew, die Jew.”

This isn’t normal. Something new appears to be happening, but it’s not yet clear what it is.

Because we’re less than two weeks removed from the ceasefire between Israel and Hamas, it’s very hard to draw clear conclusions as to why anti-Semitism spiked in America during the fighting. We can’t even be sure the wave of anti-Semitism has crested — it’s possible things will get worse rather than better.

Beauchamp points out three possible theories, "none of which are proven, but each plausible and consistent with the information we have so far."

The first, he offers, "is also the simplest: These are isolated incidents and not reflective of any deeper trend."

One is indeed tied to anti-Semitism as a sense of an anti-Israeli sentiment:

Third, it’s possible we’re seeing the beginning of what might be termed the “Europeanization” of American anti-Semitism.

While upswings of violent anti-Semitism during Israeli-Palestinian conflicts are relatively rare in the United States, they’re common in Western Europe. Data from the Kantor Center at Tel Aviv University shows that, during the 2008-’09 Gaza war, there was a massive spike in anti-Semitic violence, death threats, and vandalism worldwide — with a high percentage concentrated in European countries with sizable Jewish populations like France. During the current conflict, early data from the United Kingdom showed a 600 percent increase in anti-Semitic incidents.

It’s possible this connection is deepening in the United States, that people with anti-Israel views are increasingly more likely to blame American Jews for what they see as Israeli wrongdoing and are more likely to inflict physical violence upon them as a result.

But, another theory, which Beauchamp seems to be sold on, is that it's all Trump's fault:

A second theory is that what we’re seeing right now is, more than anything else, a reflection of an upswing in anti-Semitism that began during the Trump campaign and presidency.

There is little doubt that anti-Semitic sentiment in America began spiking in 2016. The ADL and other data sources suggest a surge beginning then, most commonly linked to the alt-right’s rise on Trump’s coattails, and continuing for the next four years. The violence has been severe.

There's no mention made about how Trump's daughter, son-in-law, and their children are devoutly practicing Jews. Likewise, there's no mention of Trump's devotion to Israel, including and especially when it comes to peace deals between Israel and their Middle Eastern neighbors.

A main point of Beauchamp's piece appears to be that he really wants to dig deep when it comes to data from the ADL, which is largely based on him citing leftist sources:

But when you look under the hood, the numbers are a little bit more complicated. A recent article by Mari Cohen in Jewish Currents, a left-wing Jewish magazine, points out that the ADL’s tracker includes recent incidents that are only dubiously anti-Semitic — like a sign at a pro-Palestinian protest with the slogan “Zionism is racism. Abolish Israel.”

The expansive definition of what qualifies as an “anti-Semitic incident” is, as Cohen points out, a longstanding and well-known problem with the ADL’s data. In his book The Jewish-American Paradox, Harvard’s Robert Mnookin argues that the ADL “plays an important role in keeping both Jews and policymakers aware of the risks of anti-Semitism, both in American and worldwide, but often exaggerates those risks in language the mainstream media typically quotes verbatim.”

Cohen redid part of the ADL’s math, looking at 43 recent cases in the ADL’s public tracker and excluding “incidents in which the ADL’s determination of antisemitism is controversial, including protest signs with anti-Zionist content or Holocaust comparisons.” Under her approach, there’s a drop in the overall number of incidents, but an even larger increase in percentage terms. While the ADL reports incidents increasing by 75 percent during the Israel-Hamas conflict, Cohen’s math suggests “more than a doubling.”

She also notes that the handful of violent incidents — the assault in Times Square, the beating of Jews out to dinner at a sushi restaurant in Los Angeles, Jews in Florida pelted with refuse, among a few others — are relatively new. “To my knowledge, we haven’t seen these attacks on Jews before during moments of mass protests on the street,” Ben Lorber, an analyst at the left-wing Political Research Associates think tank, tells Cohen.

During previous conflicts, the ADL has been deeply concerned by what it sees as anti-Semitic rhetoric at pro-Palestine protests. But this time around, Segal tells me, the language at these events has been relatively measured.

“We haven’t seen the massive amount of anti-Semitism at these rallies as we’ve seen in the past,” he says. “There is a toning down of most protests ... that, in the past, would be overwhelmed by inflammatory messages.”

This suggests that the ADL’s current numbers aren’t merely a reflection of an overly expansive definition of anti-Semitism. But it also poses a difficult question: Despite the toned-down rhetoric at mass rallies, why does there appear to be a link between the conflict in Israel and the anti-Semitic violence in America?

This is, more or less, Cohen’s conclusion in her Jewish Currents piece. “Given an American Jewish population of 7.6 million, [this is] hardly an epidemic,” she writes. “The ADL’s narrative also serves to reinforce lurking anxieties that advocacy for Palestinian rights is inherently antisemitic — even as Palestinian leaders have condemned antisemitism publicly and repeatedly.”

It looks like such a definition of anti-Semitism is very different from the definitions others might offer.

He does acknowledge this much at least, though:

The ADL’s data is the most commonly cited non-government metric of anti-Semitism in the United States, often taken as authoritative. Its information is granular and swiftly updated, allowing researchers to separate out what was happening before and after the Israel-Hamas conflict began on May 10. By its numbers, there’s a clear break and rapid increase after the onset of hostilities.

When people make it clear why they are committing such attacks, and Beauchamp himself acknowledges the theory that the United States is developing a dangerously more anti-Semitic pattern like Europe is, perhaps we should take note.