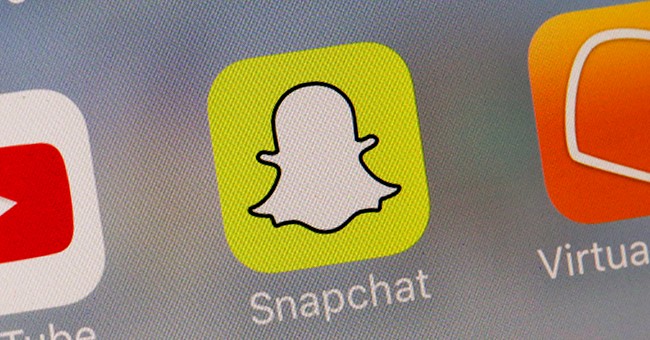 First of all, that this unidentified student would allegedly post such a snapchat, complete with a racial slur and a picture of a Black classmate, is horrifying. But, many may likewise find it disturbing that a student could be arrested for such a thing, including civil rights groups like the ACLU.

The white student, who police will not identify because he or she is a minor, is alleged to have taken a snapchat on May 7 of a Black classmate, with a caption reading "Why is there a n***er in my homeroom?" Another line in that snapchat read "Why is he not in chains?"

CNN reported on the snapchat in question, quoting the Black student's mother. Judith Medor, who is the mother of sixteen-year-old Jamar Medor saw the snapchat, and said "When I saw the post, I was really in a state of shock. I didn't know what to say, I didn't know where to begin."

Another concern is laid out by CNN:

Even with that student's potential expulsion, Medor said she remains unsure of whether her sons can stay safe in Fairfield Public Schools. Her younger son, Jake, who attends a different high school in Fairfield, received an unsolicited FaceTime call the weekend immediately following the post against Jamar, in which he was allegedly called the N-word before the caller hung up the phone, she said.

Fairfield Warde Principal Paul Cavanna issued a statement on May 7 to the school community, in which he said that "discrimination in any form is not tolerated" in the school.
"We strongly believe that racism has no place here or anywhere in our society," he wrote. "We are working to support those who have been affected by this reprehensible act."
Fairfield Public Schools Superintendent Mike Cummings also sent a letter to the district on May 12, in which he acknowledged there is still work to do in preventing incidents like this from happening again.
"As we continue our equity work as a district, we recognize that this is a journey, not a destination," Cummings wrote. "There will be missteps along the way, and while we are extremely disturbed by these incidents, they provide learning that can and will inform our work."

Police in Fairfield arrested the student on a state hate crime charge of ridicule on account of creed, religion, color, denomination, nationality or race. The misdemeanor dating back to 1917 has been called an unconstitutional infringement on free speech rights by the American Civil Liberties Union of Connecticut and some law school professors.

Police did not identify the student who was arrested because of juvenile offender laws. The student also was charged with breach of peace.

While it is common for students to be disciplined by school officials for such comments, police and civil rights advocates said it is unusual for students to be arrested for what they say on social media if it does not involve threats, incitement or a pattern of harassment.

“Having racist ideas or sharing racist ideas is something that we actually protect,” said Emerson Sykes, a senior staff attorney with the ACLU’s national chapter. “Even if that viewpoint is offensive, even if it’s deplorable, we don’t want the government making the call about what’s OK to say and think and what is not. But we have limitations on that right.”

Sykes, however, said he believed school officials would be justified in disciplining the student because the Snapchast post interfered with the Black student’s right to access education.

Fairfield school officials, citing student privacy rights, declined to comment on whether the student was disciplined, but said the student is being held accountable.

Judith Medor, whose son, Jamar, was the target of the Snapchat post, said school officials told her the other student was expelled from school.

CNN also included that, with added emphasis, "Judith Medor told CNN Thursday that she was told the student who created the post is White, was suspended and will likely be expelled."

The NAACP not only disagrees with the ACLU on this matter, but argues a misdemeanor doesn't go far enough. As CNN also reported:

Rev. Stanley Lord, the president of the Greater Bridgeport branch of the NAACP, has been advising the Medor family in the aftermath of the event and told CNN Thursday that he believes the White student should have been charged with a felony hate crime instead of a misdemeanor.
"What happened in that classroom was not just," Lord said. "So yes, this man does not deserve a misdemeanor. He needs to feel the pain, the pain that we feel when people try to equate us to stuff like that. 'Cause there's no way he's gonna go somewhere where someone can do something like that. He doesn't hurt just one child. He's now hurt a community, a number of communities."

A student may or may not be expelled, but could still be arrested? That being said, the school would be completely within its rights to address such racism in the community, something few would argue with.

Sentencing for felony hate crimes in Connecticut can carry with them up to 10 years of prison time and fees in excess of $1,000.

Curt Levey, a constitutional law attorney and the president of the Committee for Justice, shared some insight with Townhall from a free speech perspective. He also weighed in on Rev. Lord's comments:

The NAACP official who said the white student should have been charged with a hate crime does not seem to understand what a hate crime is. A hate crime is conduct – not speech – that would otherwise be illegal but is given an enhanced penalty because it was motivated by bias. The U.S. Supreme Court has repeatedly made it clear that it is unconstitutional to criminalize speech itself outside of a few well-known exceptions – most famously, yelling fire in a crowded theater – which do not include bias or hate. If the rule were otherwise, those in power could silence their opponents simply by characterizing their speech as biased. While the Left has recently tried to blur the distinction between conduct and speech, the Supreme Court has not wavered on this point.

So to the extent that Connecticut's breach of peace and ridicule laws are applied to pure speech, as here, they are unconstitutional. However, the Supreme Court has said that public schools can discipline students, outside of any criminal context, for speech which has a disruptive effect on the school. So school discipline is the way to go here. Elevating this to a criminal matter may be woke, but it's neither lawful nor wise.

When asked if he thought the Supreme Court would take up such a case if someone brought suit, Levey responded "or challenge a criminal conviction. Precedent is clear enough here that I would expect the state or lower federal courts to do the right thing without the need for Supreme Court intervention."