The Fundraising Numbers for Statewide Virginia Candidates Are In. We Spoke to the Republican Frontrunners. 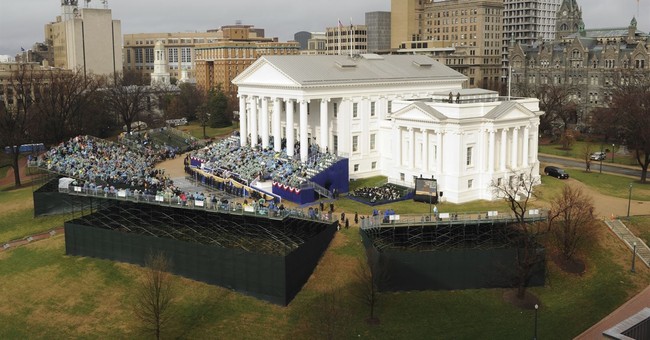 On Friday, the fundraising numbers came in for Virginia's statewide candidate races. Townhall was able to speak to the leaders in the Republican field for governor, lieutenant governor, and attorney general.

In addition to local and statewide news outlets, the fundraising numbers have gotten media attention from The Washington Post as well.

Former delegate Chris Saxman, who is the executive director of Virginia FREE, a non-partisan, pro-business non-profit organization, also provided commentary on the numbers in a column republished for Bearing Drift, emphasizing first and foremost that "Cash On Hand (COH) Cash is King. Deal with it." He also stressed the importance of looking at a data set to do with the number of "Donors under $100. Outside public polling, this is the only objective piece of information that shows popularity of the candidate. If someone will send you money, they will vote for you," which he said, with original emphasis "does NOT translate over to large donors."

Leading the pack for governor was former Carlyle Group executive Glenn Youngkin, who managed to raise almost $8 million in the quarter. "We’ve raised more money from supporters and registered more delegates than any other Republican candidate in this race, it’s clear conservative momentum is with our campaign and I’m the only candidate strong enough to beat Terry McAuliffe in November. We’re going to have an incredible day on May 8, and I can’t wait to get to work for all Virginians and make the Commonwealth the best place in America to live, work, and raise a family by building a rip-roaring economy, creating jobs, and lowering the cost of living," he told Townhall.

Saxman took note of Youngkin's $3.3 million cash on hand, and said "obviously Youngkin is in the strongest financial position."

Not far behind Youngkin was businessman Pete Snyder, who raised about $6.9 million with $2.6 million in the bank. Saxman considers Youngkin and Snyder "serious candidates" who both "tapped into their networks raising a good deal of money outside of their own credit accounts."

When it comes to lieutenant governor, Del. Tim Hugo (R-Fairfax) raised over $198,000 for the quarter, with $104,00 cash on hand. "I am honored by the outpouring of support we have received from conservatives across Virginia. Between the money we have raised and the grassroots operation we have built, our campaign is well positioned to win the Republican nomination on May 8th and, more importantly, defeat the Democrats this November. It's why leading conservatives like Congressman Morgan Griffith, Congressman Ben Cline, Ken Cuccinelli, and Corey Stewart have endorsed our campaign. I am looking forward to working with the other Republican nominees on May 8th to make sure our ticket is successful this fall," he told Townhall.

"This has been a three way race all along," Saxman pointed out. "Hugo has the financial momentum right now," he said," who, along with Sears, has "the acceleration advantage right now."

When it comes to the race to unseat the incumbent attorney general, Democrat Mark Herring, Del. Jason Miyares (R-Virginia Beach) raised $236,000, with $341,000 on hand. Saxman pointed out that Miyares "has a solid lead in this race and his force has not diminished." Saxman was perhaps the most sure on this race. "With Ranked Choice Voting, I just don’t see Miyares losing at this point," he said.

Townhall also spoke with Miyares. He called his fundraising numbers, and having raised more money than other Republican attorney generals "humbling." He spoke about his experience as a former assistant commonwealth attorney general and said that "people are absolutely hungry" for his campaign's message.

Miyares emphasized most of all that since Republican and conservative candidates can't depend on coverage from the mainstream media, certainly not for it to be fair, candidates need to be able to have the resources to get the message out there otherwise and go directly to supporters.

"As Republican candidates we know that the traditional media is dead and you can't rely on the mainstream media because they won't report it or will distort it," Miyares said, adding that the "Democratic allied media establishment will never ever give a fair shake to conservative and Republican candidates."

Miyares referenced straw polls from Giles County and Prince William County. While the results were split for other races, Miyares won both.

Speaking of the mainstream media, virtually all the coverage of these fundraising numbers focuses on Former Governor Terry McAuliffe, who has solidified his frontrunner status for Democratic nominee, with the money he's raised and cash he has on hand. McAuliffe served his term as governor from 2013 to 2017, but the Virginia Constitution prevents governors from serving back-to-back terms, which is why he is running again in 2021.

But, as Saxman writes in his commentary "If you don’t think the GOP has a chance of winning the Executive Mansion, you’re not paying attention."

Correction: A previous version of this post referred to Chris Saxman writing "...for Bearing Drift." He is a former delegate and the executive director of Virginia FREE, a non-partisan, pro-business non-profit organization. Bearing Drift has permission to repost his column.