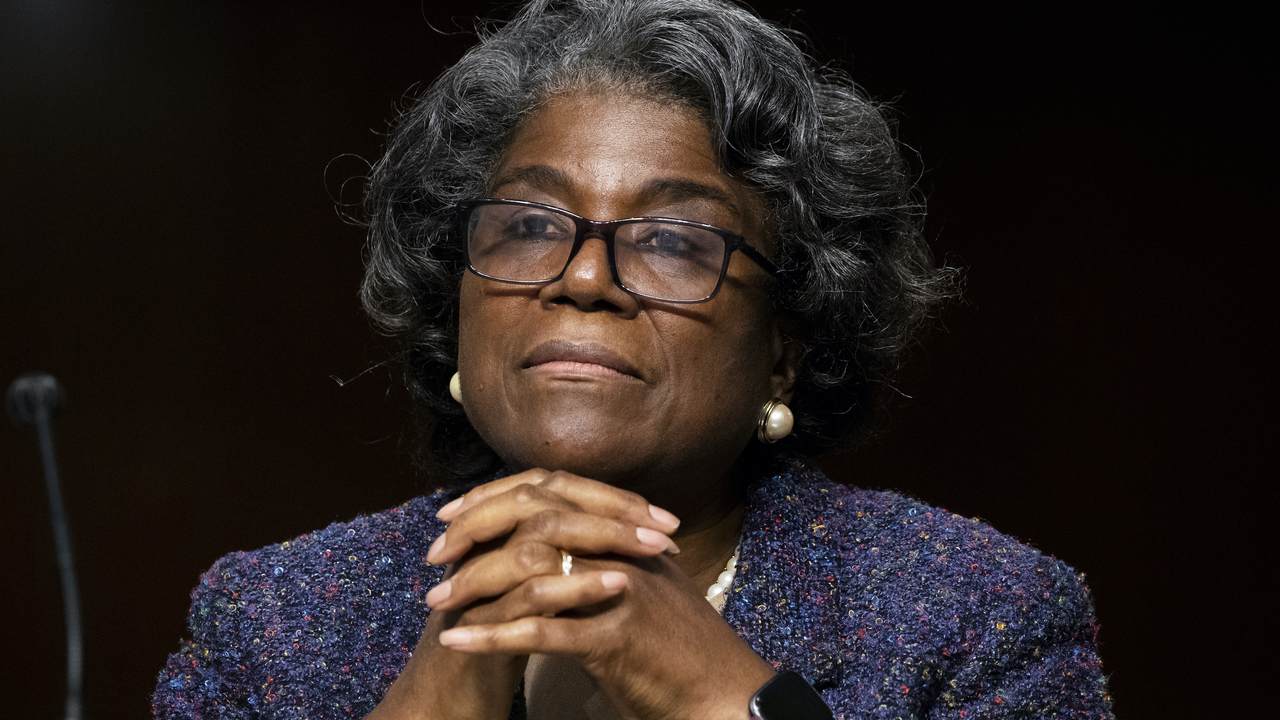 Here we go again. Someone in the Biden administration threw America under the bus. This is hardly the first time and sadly won't be the last, but it should never stop being disgusting. United Nations Ambassador Linda Thomas-Greenfield, while delivering remarks on Wednesday for the 30th Annual Summit of the National Action Network, spoke at length on race, including "slavery weaved white supremacy into our founding documents and principles."

The National Action Network, founded by Reverend Al Sharpton in 1991, describes itself as "one of the leading civil rights organizations in the Nation with chapters throughout the entire United States." It's "About" section screams "No Justice, No Peace."

It's not surprising, then, that the ambassador's remarks would be race-baiting in nature, and super congratulatory when it comes to singing the praises of saviors President Joe Biden and Vice President Kamala Harris.

Perhaps our ambassadors should defend America.

And not kiss up to the brutal tyrants (including Cuba, Venezuela, Russia & China) on the UN Human Rights Council. https://t.co/kyuhKmxF8g

It's not hard to see from his tweet that Sen. Ted Cruz (R-TX) is no fan. It turns out they have a complex history with one another. The senator vocally opposed Thomas-Greenfield's nomination and not surprisingly voted against her. He expressed deep concern of a likely failure and refusal on standing up to China.

Given Linda Thomas-Greenfield’s record, I have no confidence that Team Biden's pick for UN Ambassador will stand up to China and their pervasive influence at the United Nations. pic.twitter.com/9mefrMOMaS

After I questioned Linda Thomas-Greenfield this morning about her embrace of China in a Confucius Institute speech, some said her praise of the Chinese Communist Party was a one-off.

Let’s go to the archives.

In 2006, at the State Department, Thomas-Greenfield said she was not concerned about China's growing power in Africa. https://t.co/Ads4UOo3Ug pic.twitter.com/L42xp77iNx

On July 24, 2013, Thomas-Greenfield told the Senate, "I do not see us as competing" with China in Africa. https://t.co/bD8dHqK8RV pic.twitter.com/JTYSJsxhwi

In May 2014, Thomas-Greenfield said she was not concerned about China buying its way into controlling Africa, that African leaders should work to get the best possible deal with China, and in fact we were also "working closely with the Chinese." pic.twitter.com/EteRlAgche

And then in March 2019, Thomas-Greenfield again said she did not see the U.S. as competing with China for influence in Africa and with African leaders and that our role was "to ensure that they have the capacity to strike and negotiate better deals with the Chinese." pic.twitter.com/4N7BEu8Uxi

Such a hesitancy to boldly stand up to the CCP seems to be a trend when it comes to the Biden administration.

Thank you so much. I’m so honored to be a part of this celebration of 30 years of the National Action Network.

Reverend Al Sharpton, thank you for never backing down. Your lifetime of activism is an inspiration to us all. So long as the world wants for justice, I feel better knowing you and the National Action Network will demand it.

And when I say the world, I mean it. Because so many of our most pressing issues of justice and civil rights no longer respect borders. And even more important, we have to shape the global solutions to these challenges, to ensure they are just.

Take the pandemic, for example. COVID-19 is sometimes referred to as the great equalizer. After all, it has affected everyone. But the truth is, it hasn’t affected us all equally. Instead, it has exacerbated existing inequalities. We all know that poor communities and communities of color are being hit hardest by the virus and receiving the fewest resources.

The pandemic is also acting as a force multiplier, taking every threat to Black people – particularly women and girls – and compounding the danger. That’s why it’s so important to engage on a global scale. If we go it alone, and retreat from the world, then we let existing inequalities fester. But if we engage, then we can push for change – and demand justice.

That’s why, under President Biden’s leadership, we’ve been restoring our alliances and recommitting to multilateral institutions. We rejoined the World Health Organization, because we believe we can make the WHO a smarter, nimbler, and more just by rolling up our sleeves and getting involved. We proudly rejoined the Paris Agreement, because the only way to reverse the effects of the climate crisis is to join forces. And we know that if we don’t act, poorer communities and communities of color, especially in the Global South, will suffer the most. And we immediately re-engaged with the Human Rights Council, and have announced our intention to seek election to that body, so that we can advance our most-cherished democratic values around the globe.

Of course, when we raise issues of equity and justice at the global scale, we have to approach them with humility. We have to acknowledge that we are an imperfect union – and have been since the beginning – and every day we strive to make ourselves more perfect, and more just. In a diverse country like ours, that means committing to do the work. It means learning and understanding more about each other. It means engaging trailblazing groups like yours to teach, to grow, to include, to improve. It means not forgetting our past or ignoring our present, but keeping both firmly in mind as we push for a better future.

I tried to do this recently in the UN General Assembly, when I spoke on the International Day for the Elimination of Racial Discrimination. That day – and commemoration – was personal for me. So, I told the UN some personal stories. I told them about how my great-grandmother Mary Thomas, born in 1865, was the child of a slave. Just three generations back from me. I grew up in the segregated South. I was bussed to a segregated school. On weekends, the Klan burned crosses on lawns in our neighborhood.

I shared these stories and others to acknowledge, on the international stage, that I have personally experienced one of America’s greatest imperfections. I have seen for myself how the original sin of slavery weaved white supremacy into our founding documents and principles. But I also shared these stories to offer up an insight, a simple truth I’ve learned over the years: Racism is not the problem of the person who experiences it.

In America, that takes many forms. It’s the white supremacy that led to the senseless killings of George Floyd, Breonna Taylor, Ahmaud Arbery, and so many other Black Americans. It’s the spike in hate crimes over the past three years – against Latino Americans, Sikh and Muslim Americans, Jewish Americans, and immigrants. And it’s the bullying, discrimination, brutality, and violence that Asian Americans face everyday, especially since the outbreak of COVID-19. That’s why the Biden-Harris administration has made racial equity a top priority across the entire government. And I’m making it a real focus of my tenure at the U.S. Mission to the United Nations.

But when I say racism is a problem in every society, that means looking beyond America’s borders too. Across four decades and four continents in the foreign service, I experienced racism in countless international contexts. From overly invasive searches at airports, to police racially profiling my son, to being made to wait behind white patrons for a table at a restaurant. Racism was and continues to be a daily challenge abroad. And for millions, it’s more than a challenge. It’s deadly.

Like in Burma, where Rohingya and others have been oppressed, abused, and killed in staggering numbers. Or in China, where the government has committed genocide and crimes against humanity against Uyghurs and members of other ethnic and religious minority groups. The prevalence – and pervasiveness – of racism and racial inequality might make the situation look hopeless.

Just look at the way the Black Lives Matter movement spread this past summer. What took hold in the streets of Minneapolis made it to Monrovia, and Madrid, and London, and Sydney, and Berlin, and Cape Town, Stockholm, and Rio de Janeiro, and Tokyo, and on, and on, and on. Or look at Burma, where righteous protestors facing brutal violence are demanding democracy and deploying techniques, like strikes and slow-downs and marches, in the mold of Dr. King.

My point is, what we do here matters not just to our own communities, but to people across the globe. Because if today our challenges are global, so too is our solidarity.

So, I am thankful for everything you do. And I ask you to keep convening your communities, cajoling your representatives, and championing our civil rights at every turn. Because I know your work this next 30 years will be even more invaluable than the last, both for us here at home, and for communities of color around the world.

Notice in that speech that China gets a one sentence criticism. Burma is called out in another. Speaking of China, during the abysmal meeting last month when Secretary of State Antony Blinken met with top Chinese officials, the communist nation lectured us on race. They too referenced Black Lives Matter and similarly criticized our racist nation. During his March 25 press conference, President Biden admitted that during a phone call with Xi Jianping, he claimed "we don't always live up to our expectations..." Gee, I wonder where the CCP is getting their material to hit us back for.

Ambassador Thomas-Greenfield makes no mention over how the Human Rights Council endorsed China's crackdown of Hong Kong freedom lovers with their national security law. Also absent is any mention of how the Council voted on a resolution in favor of Venezuelan dictator Nicolas Maduro, which was written by Maduro himself.

Why would these countries have to worry about the United States cracking down on them for their human rights abuses, when we're too busy hating on ourselves.

The Trump administration withdrew from the Human Rights Council in June 2018 as the body includes human rights abusers and President Trump said was in need of reform. Sec. Blinken announced in February that the United States was rejoining.

To leave you with a more fond memory, Nikki Haley, who served as the U.N. Ambassador under Trump, had a much different take on our nation during the 2020 RNC. While sharing her own personal American Dream story, she shared her belief that America is not a racist country.

America is Not a racist country. pic.twitter.com/mYe0wW6QBa