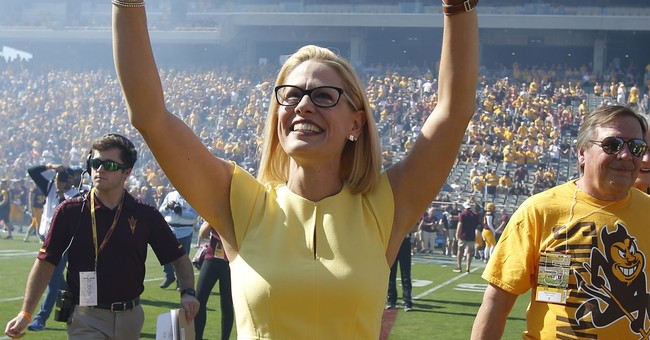 Democratic Sens. Joe Manchin (WV) and Kyrsten Sinema (AZ) have experienced their fair share of pressure to give up on their support of the filibuster. The two have doubled down on it, evidenced by the Wall Street Journal's interview with Sen. Sinema published on Tuesday and an op-ed from Sen. Manchin published on Wednesday. That rubbed a lot of people the wrong way, to the point where many over Twitter hijacked the death of Sen. Sinema's former intern, Alexander Lofgren, in an attempt to browbeat her into rescinding her support.

I am heartbroken. I just learned that we’ve lost my former intern and absolutely stellar young man Alexander Lofgren. He had a heart of gold and worked so hard for Arizona and our country. I’m sending so much love to his family and friends. May he rest in power. ?? pic.twitter.com/Yk41Bal8uj

Would your intern want you to eliminate the filibuster and pass HR1, Senator Sinema?

Look at that time stamp. That tone deaf reply came two minutes after the initial tweet.

Sksnengi wasn't the only user who turned to such tactics, unfortunately.

You and Manchin will be the reasons Democrats lose the senate!

I will save my sympathy for our dying democracy and for all the woe and suffering that will result. Perhaps if @SenatorSinema cared about voting rights, which clearly she does not, I could have more empathy. She deserves none.

Life is short. Keeping an artificial Senate procedural device like the filibuster at the expense of millions of shattered lives hardly seems worth it.

Things got even more vitriolic when Sen. Sinema retweeted Sksnengi's reply, especially since some people don't seem to know "Not tonight, Satan" is a saying.

None of this is funny. If you block voting rights, that will be your legacy.

When we look back at America being a democracy and a few senators could have saved it, you won’t be viewed favorably.

What a weird one, @kyrstensinema.
Ending the filibuster is the right thing to do, and has nothing to do with Satan.
Your meanness in not wanting Arizonans or anyone in USA to have $15/hour keeps them poor. As a Senator you want to keep people poor.
That's pretty Satanish of you!!

Wow! This doesn't seem very professional for a Senator. Are you suggesting @sksnengi is the Satan?

Vote for HR 1.
Abolish the filibuster.

The always pleasant Joy Reid, who hosts MSNBC's The ReidOut, also took to targeting the senators, doing so earlier on Friday night. Reid began her segment titled "The Absolute Worst" with claiming "When it comes to legislation, President Joe Biden said that inaction is not an option. But if Prime Minister Joe Manchin has his way, it's definitely going to be on the menu." She also referred to him as "the Prince of Appalachia" when criticizing his op-ed published in the Washington Post, getting the date of his piece wrong, too. Reid called Sen.  Manchin's efforts for bipartisanship "this act."

Reid took aim at Sen. Sinema for her and Sen. Manchin's "quixotic quest," referring to her as "one-time progressive."

A considerable portion of the segment also focused on HR 1, the "For the People Act," as Reid laughed off legitimate concerns from critics. Those lengthy, long-term, and constitutional concerns have been laid out in a piece here detailing comments from Jason Snead, the executive director of Honest Elections Project.

"And so, Sen. Manchin and Sinema, the no progress caucus, you two, are tonight's absolute worst," she closed the segment with. By the progressive left's standards, "progress" basically amounts to browbeating, shaming, and bullying. Got that. Hey, it's good to know what we're up against, at least.