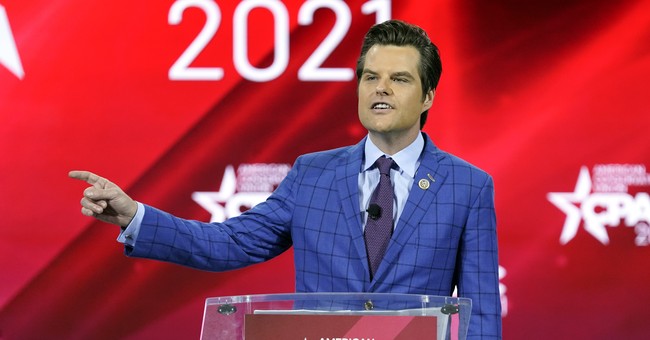 In light of the news that Rep. Matt Gaetz (R-FL) is under investigation from the Department of Justice when it comes to sexual relations with a 17-year old, one PAC has taken out quite the billboard against the congressman. As Jordan Williams with the Hill reported, "'Matt Gaetz wants to date your child' billboard appears in Florida."

Mad Dog PAC, which Williams describes as "liberal" paid for the billboard. It turns out that the chair of that PAC is "Claude Taylor, a former staffer in former President Clinton’s White House."

Of all PACs to take out such an ad, I'm not sure if someone like Claude Taylor ought to be the one to do so and speak up so vocally about it.

Hello, @mattgaetz any thoughts on the billboard? Reporters are trying to reach you for your comments... pic.twitter.com/gFqhQwX6Qt

In case you need a refresher, President Bill Clinton faced allegations of sexual misconduct, including rape. He's also infamous for sexual misconduct with White House intern Monica Lewinsky, which occurred in the Oval Office, while he was president, and was impeached on accusations for perjury and obstruction of justice when it came to the affair.

When it comes to the former president, Rep. Gaetz wrote in his op-ed, "Rep. Matt Gaetz: The swamp is out to drown me with false charges, but I'm not giving up," published by the Washington Examiner on April 5: "Nancy Pelosi once defended President Bill Clinton after he got an intern to fellate him in the Oval Office. But when it comes to the allegation that I, a grown man, paid for an adult girlfriend’s expenses? Well, consider that a bridge too far for the power-hungry hypocrites."

President Clinton has also been associated with convicted sex offender, Jeffrey Epstein, though a spokesperson for the former president has consistently denied the claim he visited Epstein's private island. He is known for and acknowledged flying on Epstein's jet, however, to other locations.

Those claims to do with Clinton's involvement come from Epstein accuser, Virginia Roberts Giuffre.

Indeed, one name in the unsealed papers was that of a former U.S. president. [Accuser Virginia Roberts] Giuffre told one attorney that Bill Clinton was a guest during a trip to Epstein’s private isle in the U.S. Virgin Islands and that Epstein joked to her about Clinton being in his pocket.

“You know, I remember asking Jeffrey what’s Bill Clinton doing here [on the island],” Giuffre told the lawyer. According to a transcript of their conversation, Giuffre added that Epstein laughed off her question and said, “Well, he owes me a favor.”

“He never told me what favors they were,” Giuffre said. “I never knew. I didn’t know if he was serious. It was just a joke.”

Jose Pagliery and Roger Sollenberger The Daily Beast reported Thursday night that "Gaetz Paid Accused Sex Trafficker, Who Then Venmo’d Teen." The article was updated on Friday afternoon, with a note that it was "Updated with comment from Gaetz."

Rep. Gaetz retweeted copies with the personal contact information redacted from spokespeople for Gaetz, taking issue with the Daily Beast for not originally including such "comment."

The Daily Beast dropped a new piece on Gaetz and refused to include the Congressman’s statement, per correspondence pic.twitter.com/tlloTjQP2Q

The three-term Republican has acknowledged the existence of the investigation but denies the allegations. He told The Daily Beast in a late-night March 31 text message that, “The last time I had a sexual relationship with a seventeen year old, I was seventeen.” And in an op-ed in the conservative-leaning Washington Examiner last weekend, Gaetz claimed that he “never, ever paid women for sex.”

Gaetz has not been charged with a crime, and Gaetz’s congressional office declined to comment directly for this story.

Instead, a representative from an outside public relations firm, the Logan Circle Group, responded with this statement from Gaetz: "The rumors, gossip and self-serving misstatements of others will be addressed in due course by my legal team."

Logan Circle's Erin Elmore—a pro-Trump pundit and former contestant on The Apprentice—added that a lawyer would be "closely monitoring your coverage."

Also cc'd on the email was another Logan Circle Group employee: Harlan Hill, who was banned from Fox News after calling now-Vice President Kamala Harris "an insufferable lying bitch."