Not Just About Politics: Gov. Noem Has the Chance to Be a True Champion and Protector of Women's Rights 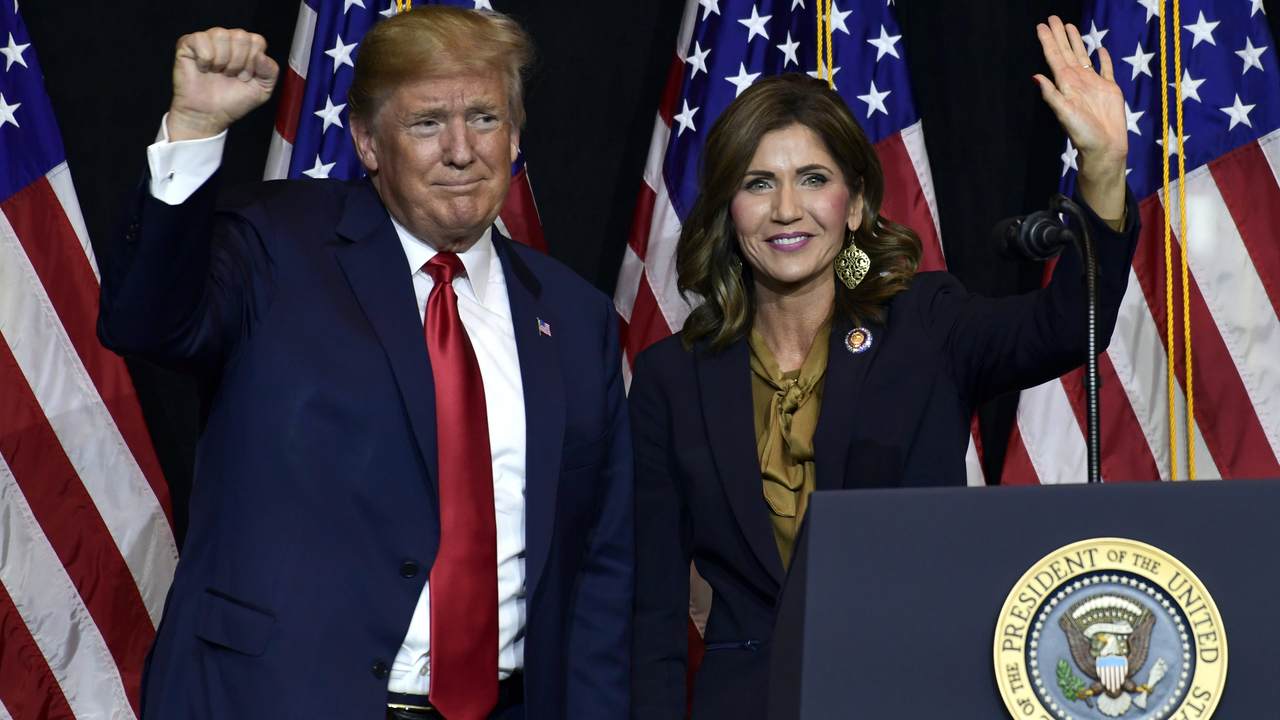 The saga with Gov. Kristi Noem (R-SD) not yet signing a bill banning transgender athletes from participating in women's sports continues. Now, her spokesperson, Ian Fury, is claiming in a statement to the Daily Caller News Foundation that the governor is a victim of how "uninformed cancel culture is fine when the right is eating their own."

Beth and I have extensively covered this sort of complex path that Gov. Noem has been on, from Twitter threads to misuse of her veto power as governor, to having to justify her inaction to Tucker Carlson, who wasn't buying it, by the way. The governor has been acting as if she is on defense now, anticipating all sorts of justifications for not doing what she expressed eager support for just a few weeks ago.

Jon Schweppe, the director of government affairs at the American Principles Project emphasized to Townhall that such a claim about "cancel culture" is "disingenuous." He further added that "it’s not cancel culture, it’s asking our politicians to back up what they’ll say they’ll do. And I don’t think that’s too much to do."

Schweppe, who has said he's rooting for Gov. Noem to do the right thing, has also said it will be harder for voters to see Noem as a fighter, which is what voters want, come 2024. Others have speculated what this could mean for Noem's career, and it's not good.

She's gone from being a second-tier presidential candidate to just about knocking herself out of consideration to be Ron DeSantis' VP pick https://t.co/7J0JkilBZx

While Gov. Noem has repeatedly mentioned a "legal scholar" advising her to act as she is, Schweppe has repeatedly pushed back. He's stuck by Alliance Defending Freedom's consistent and vocal support of the bill.

I think folks in conservative media understand her position perfectly: we can't stand up against private moneyed interests because they're too powerful.

But the real reason folks are incensed at her: she's insulting our intelligence by pretending she's a champion of the issue. https://t.co/aVOS3V8QQX

General Counsel for ADF, Kristen Waggoner, has been particularly vocal on the matter while speaking to Tucker Carlson on Twitter.

Tucker: "She got bullied by business interests and she caved at a time when we need leaders who are courageous, and she's not." pic.twitter.com/s3AMtaP5cc

For years, courageous athletes like Selina Soule & Chelsea Mitchell have been in the arena, fighting for a fair playing field. ADF and a coalition of athletes, legislators, governors, AGs from 14 states, & others have been honored to stand with them in court and legislatures. 1/2 https://t.co/l8l187v1Fl

@govkristinoem has the opportunity to be a serious champion for girls and women, and we hope she does so by signing the legislation. If Gov. Noem is concerned about litigation, as she said today, ADF would stand with her to defend H.B. 1217 if she signs this legislation. 2/2

For those asking about @govkristinoem’s criticisms of HB 1217:

1. She didn’t want the bill to apply to college athletics.

2. She didn’t want high school girls whose rights were violated to have the right to sue.

3. She had technical amendments about drug testing. 1/4

She also said in the following statement:

“Alliance Defending Freedom defends victims of cancel culture every day. Exposing invented explanations for bad decisions and criticizing Gov. Noem for caving to woke corporations is not cancel culture. It’s accountability. And it’s a grave injustice to compare public criticism of her decision to gut the Fairness in Women’s Sports legislation to those who have truly been victimized by cancel culture. The truth is there is no NCAA policy that requires males to compete against girls. The governor could have demonstrated courage in the face of special interests but instead is using sleight of hand and smoke and mirrors to cover her tracks. That’s not what a real leader does. Real leadership does the right thing even when it’s hard. That’s what other governors have done. And that’s what 14 attorneys general did when they signed in support of similar legislation in Idaho. Gov. Noem caved to pressure from corporate special interests when others haven’t, and it has harmed the broader effort to protect fairness in women’s sports. We hope Gov. Noem will join these states by signing H.B. 1217 rather than continuing her current course.”

It's curious that Fury would talk about cancel culture. Somebody ought to tell Gov. Noem's people that "you keep using that word. I do not think it means what you think it means," to quote "The Princess Bride." The issue is more about using iconic movie quotes in attempts to try to get a point through to the governor, who, quite frankly, has shocked and disappointed so many.

What the main point is, when it comes down to it, is that if anything or anyone is being "canceled," it's young women who will suffer from having to compete against biological men in sports, unless they are protected by the law.

Young women were able to win a crucial victory and achieve success through, but have also needed the protection of, Title IX, in order to have equitable opportunities in sports. As described by the U.S. Department of Education:

Title IX of the Education Amendments of 1972 (20 U.S.C. .1681 et seq.) prohibits discrimination on the basis of sex in education programs receiving Federal financial assistance. Athletics are considered an integral part of an institution's education program and are therefore covered by this law. It is the responsibility of the Department of Education (ED), Office for Civil Rights (OCR), to assure that athletic programs are operated in a manner that is free from discrimination on the basis of sex.

The Women's Sports Foundation in 2016 noted that "Before Title IX, one in 27 girls played sports. Today that number is two in five. While we still have far to go before every girl has equal access to sports, especially girls of color, it is clear that we are making headway."

In writing about how "Title IX Has Partially Opened Doors for Women," The National Women's Law Center shares that "Because of Title IX, women have gone from being almost totally excluded from athletics to having a disproportionately small but important share of athletic opportunities." Also noted is how "Title IX has made a huge difference in female participation in intercollegiate sports. The number of college women participating in competitive athletics is now nearly five times the pre-Title IX rate. In 2008-09, a record number of 182,503 women competed, representing 43% of college athletes nationwide."

We've all heard the stories about biological men competing in women's sports because they identify as trans women, and then, what do you know, they end up winning. Young women don't stand a chance. They've shared their stories about how unfair it is, many of them are highlighted here by Melanie Wilcox in a rather comprehensive piece she did for Verily. It's time we listen to them and actually do something to act on it.

Idaho State Rep. Barbara Ehardt, sponsor of the Fairness in Women’s Sports Act, which was signed into law last summer, said it best. According to Wilcox's piece:

This will destroy athletics for women,” Ehardt says. “It will be called ‘athletics’ in general, one category dominated by males, if we continue down this path. That’s what Title IX was for—to prevent this from happening. Title IX provided the opportunity for girls and women not just in sports but educational opportunities, and it’s been an important component to move forward and compete and learn and experience—the same things male counterparts have had all their lives.

The plight these young women athletes face is far from the only problem. Young women have to share locker room facilities with biological men, creating a vulnerable situation, to be sure. When it comes to vulnerable women, what about the plight of women who seek refuge in shelters for domestic violence survivors, which are specifically geared toward women? To do so alongside a biological man means it's no longer a refuge.

To bring it back to Gov. Noem for a moment, yes, her political career could be on the line, which is big news for a once-rising star many had high hopes for, including President Donald Trump. The Trump family though, including Donald Trump Jr., have stood by women playing sports without having to compete with biological men.

What Schweppe told Townhall he took issue with specifically regards the governor speaking of "strategy" and building a "coalition." Schweppe himself referenced Idaho, encouraging Gov. Noem to build a coalition with Idaho, Mississippi, and other states considering and likely to pass such legislation.

Gov. Noem has the chance to make a difference and be a rising star by listening to her constituents and signing this bill into law. More importantly, she has the chance to stand up to protect women and be a true champion of women's rights.