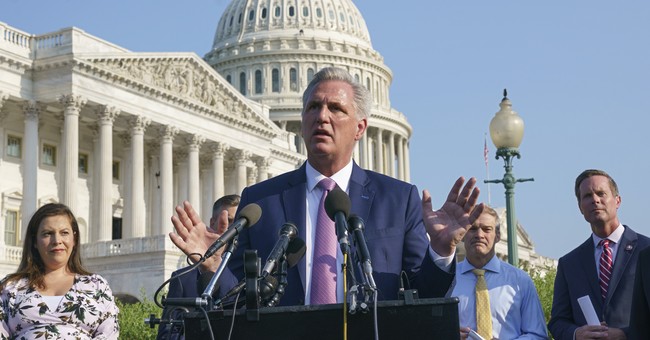 House GOP Leader Kevin McCarthy (R-CA) is taking action against Speaker Nancy Pelosi’s (D-CA) proxy voting policy in the lower chamber that was implemented under the guise of the pandemic. McCarthy argues that the proxy voting protocol is a violation of the Constitution.

“I'm asking the Supreme Court to uphold the Constitution by overturning Speaker Pelosi’s perpetual proxy voting power grab. Although the Constitution allows Congress to write its own rules, those rules cannot violate the Constitution itself, including the requirement to actually assemble in person,” McCarthy said in a statement. “Since its adoption 14 months ago, proxy voting has shattered 231 years of legislative precedent and shielded the majority from substantive policy debates and questions, effectively silencing the voices of millions of Americans. It was a raw abuse of power from the beginning that was done despite unified opposition from the minority and even members of the majority.”

He added that on the other side of the Capitol, the Senate has managed to navigate the pandemic without proxy voting.

“The Senate has managed through the whole pandemic without proxy voting because they know, as we do, that it is unconstitutional. To restore the House to its proper legislative role, the Supreme Court must strike down proxy voting,” he continued.

She cannot be permitted to write rules that violate the Constitution itself, including the requirement for Congress to assemble in person.

Lawmakers in both parties have misused the proxy voting policy, which was originally implemented for COVID- prevention purposes.