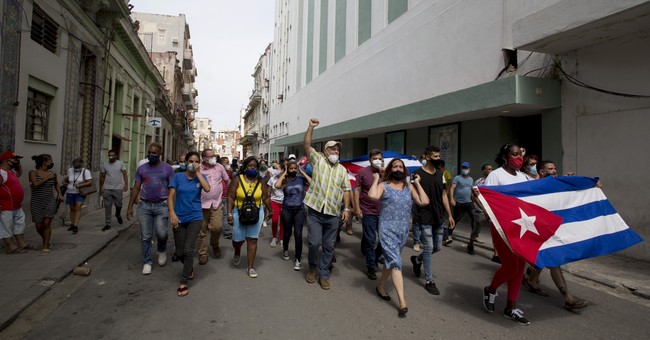 Florida Democrats received harsh criticism from the editorial board of the Miami-Herald on Thursday for a “flat footed” response to the pro-freedom protests in Cuba. Republicans including Governor Ron DeSantis (R-FL), Senator Marco Rubio (R-FL), and Congresswoman Maria Elvira Salazar (R-FL) have been on the front lines of the solidarity effort, the editorial board wrote, while Democrats are missing-in-action.

“Clearly, Republicans grasp the historic significance of the street demonstrations in Cuba — a crack in the armor of the Castro-inspired government. Real change can come of it. The Republican plan is to show support for the Cuban people, keep the pressure on the island government and find a way to get internet service to the 11 million Cubans on the island so they know the international community supports them,” the editorial reads. “Where are Florida Democrats? With some exceptions, they have been caught flat-footed. Without a vigorous Cuba playbook, they have failed to publicly unite on this issue. While Republicans are in full stereo mode, Democrats are still mired in static and searching for their channel. We would call their statements off-message, but almost two weeks after anti-government protests erupted across Cuba, Democrats didn’t even have a message to be off of…”

Among the Democrats under fire for the "flat footed" response is Nikki Fried, who is running in the Democratic primary to face DeSantis in 2022, as the Republican Governors Association (RGA) noted.

“It’s been nearly two weeks and Nikki Fried still hasn’t released or endorsed any concrete plans or policies to support the people of Cuba,” said RGA spokesperson Joanna Rodriguez. “Fried panders to Florida Hispanics with Spanish tweets and by leaving her more liberal credentials off her Spanish website, but the reality is she isn’t an ally because she has chosen silence in fear of the progressive socialist base she hopes will win her the Democratic primary. Florida Hispanics – and especially Cubans – won’t forget it. ”

Republicans have also called on the Biden administration to stand in solidarity with pro-freedom protesters in Cuba and against the communist regime.