Dan Crenshaw Announces He Is on the Mend After Emergency Surgery 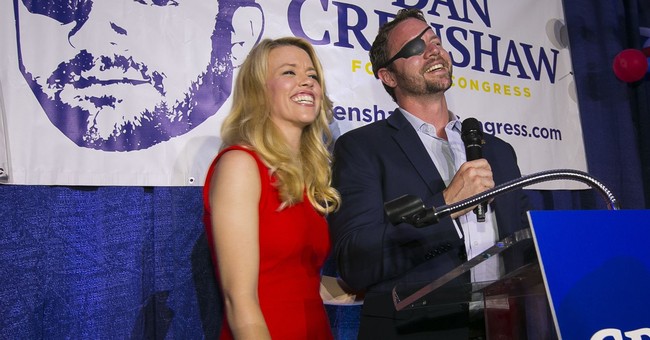 Congressman Dan Crenshaw announced on Thursday that he is on the mend after undergoing surgery for an issue with his retina. The Navy SEAl veteran and Texas Republican revealed earlier this month that he would be “effectively blind” in the weeks immediately following the procedure.

“A few days ago, I noticed some dark, blurry spots in my vision, which seemed out of the ordinary. I went to get this checked out by an ophthalmologist on Thursday and they discovered that my retina was detaching,” Crenshaw said at the time, adding that “the prognosis I received Thursday is obviously very bad."

Now, 3 weeks later, Crenshaw posted an update from Houston, Texas, where he is recovering from surgery.

“I’m still alive, still doing okay,” Crenshaw said before detailing the after-effects of the procedure. He said that he is optimistic that he will regain his vision fully and return to Washington, though he is completing his “official duties” from Texas while his staff on Capitol Hill continues to keep his office functioning.

Quick update on my recovery and how I am doing! pic.twitter.com/ACDFqzy11j

Crenshaw also appeared at a committee hearing, virtually, on Thursday, even in spite of his injuries.

"We raise our right hand, and then we ask to go to war, and sometimes this is what happens. But I hope to be back to normal within a couple of months. But for now, even a blind knuckle-dragger can do a hearing, so here I am. Let’s get to work,” he said to the House Energy and Commerce hearing.