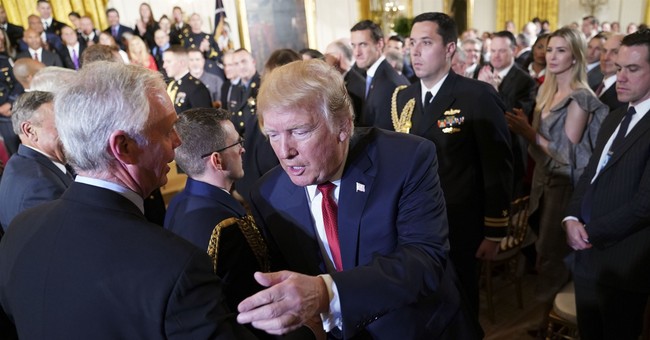 Former President Donald Trump urged a key GOP senator to run for reelection, in a statement released on Thursday. Trump gave his endorsement to Wisconsin Senator Ron Johnson (R-WI), who is rumored to be considering retirement. The former president said that Johnson possesses the “kind of courage we need in the U.S. Senate.”

"Even though he has not yet announced that he is running, and I certainly hope he does, I am giving my Complete and Total Endorsement to Senator Ron Johnson of Wisconsin," Trump wrote in a statement. "He is brave, he is bold, he loves our Country, our Military, and our Vets.  He will protect our Second Amendment, and everything else we stand for.  It is the kind of courage we need in the U.S. Senate.  He has no idea how popular he is.  Run, Ron, Run!"

Great endorsement by President Trump!@RonJohnsonWI is a great leader and champion for the people of Wisconsin and American families across the country. pic.twitter.com/bX2LyeS76z

When first elected to the upper chamber, Johnson vowed to only serve 2 terms, but has yet to announce retirement. He said recently that retirement is “probably his preference” at the moment. If he does elect to not run for reelection in 2022, Johnson would join GOP Senators Richard Burr (NC), Pat Toomey (PA), Rob Portman (OH), Richard Shelby (AL), and Roy Blunt (MO) in announcing retirement before the midterm elections.