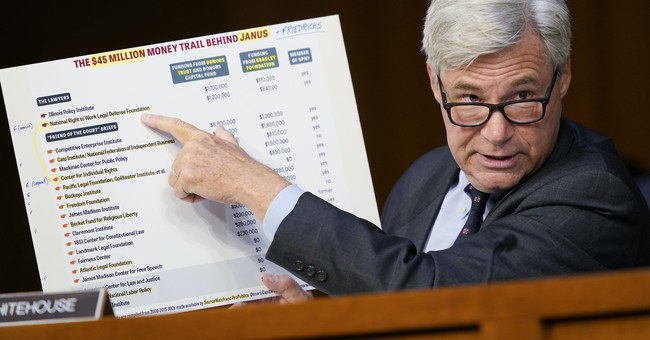 Democratic Senator Sheldon Whitehouse (D-RI), a high-ranking member of the Senate Judiciary Committee, is propping up another conspiracy theory surrounding the confirmation of Supreme Court Justice Brett Kavanaugh. An original proponent of the outlandish theories about then-Judge Kavanaugh during his blisteringly partisan confirmation process, Whitehouse now suggests that the FBI’s background check into Kavanaugh was “fake,” as part of a larger coverup for the Trump administration.

In a letter to newly-confirmed Attorney General Merrick Garland, the senator criticized the “tip line” created by the FBI at the time in order to allow for additional allegations and corroboration to be given. Whitehouse said that members of the upper chamber were given “no explanation” of “how, or whether, those allegations were processed and evaluated.”

FBI Director Christopher Wray assured the Senate Judiciary Committee that the investigation into Kavanaugh was “consistent with our [FBI’s] long-standing policies, practices, and procedures for background investigations,” but the assurance did not satisfy Whitehouse.

“If standard procedures were violated, and the Bureau conducted a fake investigation rather than a sincere, thorough and professional one, that in my view merits congressional oversight to understand how, why, and at whose behest and with whose knowledge or connivance, this was done,” he wrote to AG Garland. “The FBI ‘stonewall’ of all questions related to this episode provides little reassurance of its propriety. If, on the other hand, the ‘investigation’ was conducted with drawbridges up and a fake ‘tip line’ and that was somehow ‘by the book,’ as Director Wray claimed, that would raise serious questions about the ‘book’ itself. It cannot and should not be the policy of the FBI to not follow up on serious allegations of misconduct during background check investigations.”

Even before being nominated to serve on the high court, Justice Kavanaugh was subject to multiple other background checks in other public service capacities. There is no real evidence presented thus far to back up Whitehouse’s claim that the FBI investigation during Kavanaugh’s confirmation was in any way compromised.