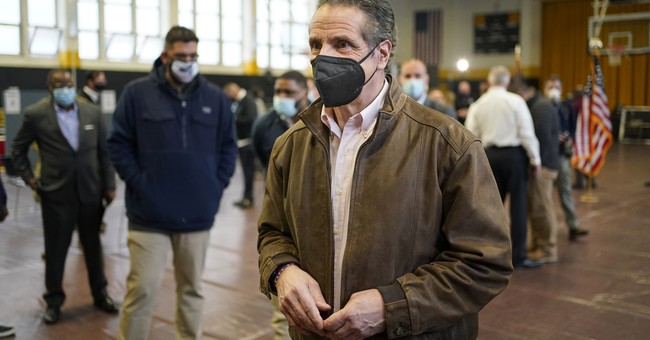 The Republican State Leadership Committee (RSLC) conducted a poll within 14 of New York’s state Senate and Assembly districts, and found a bad trend for Cuomo. The poll inquired with 1,400 “high propensity registered Independents,” a memo reads, about the governor’s mounting scandals. The results found that 65 percent of Independent voters surveyed would be “less likely” to support their Democratic legislator if the lawmaker were standing in solidarity with Cuomo.

Republicans are currently in the minority in both the state Senate and Assembly, but this polling shows that Democrats are growing frustrated with Cuomo’s conduct. A growing number of Democrat and Republican lawmakers on the state and local level have called for Cuomo’s resignation, or a wide-ranging, independent probe of his conduct related to coronavirus and workplace sexual harassment. The RSLC's memo predicted that allegiance to Cuomo could be detrimental to New York Democrats up for reelection in 2022.

"Running on the same ticket as Cuomo in 2022 could be catastrophic in itself, and Republicans should look to capitalize," the memo says.

The governor has made it clear that he will not resign and has expressed minimal remorse for either scandal.

"I was elected by the people of the state. I wasn't elected by politicians. I'm not going to resign because of allegations,” Cuomo said.