Ossoff and Warnock Sworn in as Democrats Take Senate Majority 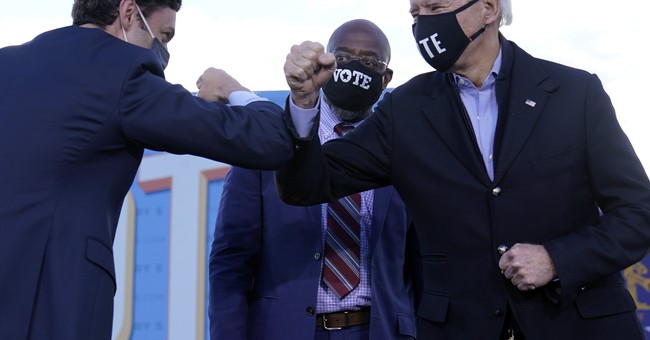 Georgia Senators Jon Ossoff and Raphael Warnock were sworn in by Vice President Kamala Harris Wednesday, following the inauguration of the Biden administration. Ossoff and Warnock defeated former Senators David Perdue and Kelly Loeffler, respectively, in the pair of runoff elections in Georgia on January 5.

My dad always told me to, "get up, put your shoes on, get ready."

I'm ready to put the Senate back to work for the American people. pic.twitter.com/5wWSmxxYd8

The newly-minted Senators' swearing-in officially puts the majority in the Senate in the hands of Democrats, and gives Joe Biden a slim majority in both chambers of Congress for the opening years of his first term in office. Harris also swore in her successor, Alex Padilla, to represent California. Senator Chuck Schumer (D-NY) now serves as majority leader.

Democrats now have the Senate majority, and @SenSchumer is now the majority leader.@ossoff, @ReverendWarnock and @AlexPadilla4CA have been sworn in.

Spotted on the floor: McConnell saying hello to Ossoff, Warnock, and Padilla, who are about to be sworn in

Democrats were able to flip the Senate in part because of suppressed Republican turnout in Georgia, on account of the president telling voters that the general election was stained by "widespread fraud." Upwards of 500,000 Republican voters in Georgia stayed home from the polls on January 5.

The balance of power in the Senate now sits at a 50-50 split between Republicans and Democrats. Vice President Harris will act as the tie-breaking vote.