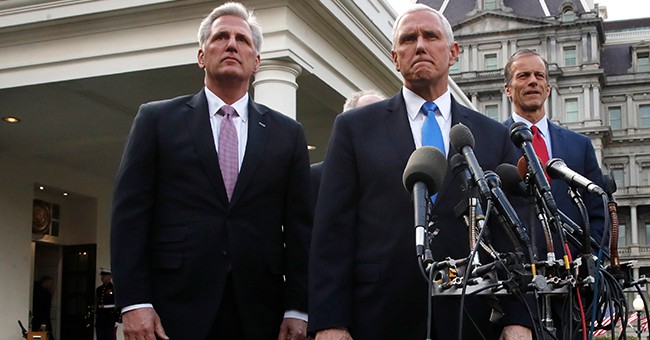 “President Donald Trump led our country in acknowledging and confronting these generational challenges,” McCarthy said in a statement Wednesday, per the Washington Examiner. “It would be wise to pick up that mantle and work towards common ground to make our country and her people stronger.”

Here are just a few of the big wins the Trump-Pence Administration accomplished for hardworking Americans over the last four years:

McCarthy partially blamed Trump for the insurrection that occurred on January 6 at the Capitol. Following the inauguration ceremony, the House Republican leader encouraged the new president and vice president to work toward addressing the challenges facing the nation.

Now we must get to work to solve the challenges facing our country. We are all Americans, and together we will succeed, as we have for more than 230 years.

Kevin McCarthy, who didn’t acknowledge Biden’s win until after Jan. 6, says: “With margins in the House and Senate narrow, and President Biden promising to represent everyone, I believe we can unite and restore peace, prosperity, and safety.”