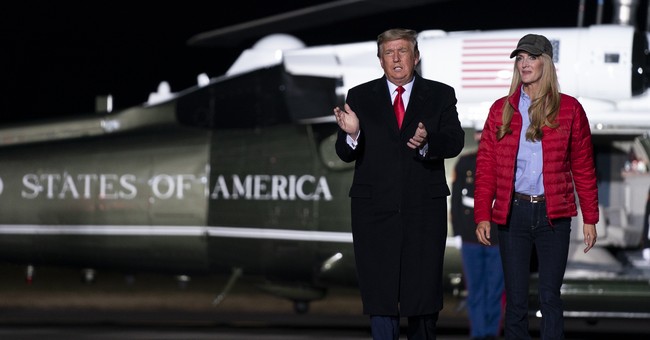 Dalton, Georgia--President Trump paid one final visit to Georgia on Monday, on the eve of Tuesday’s pair of runoff Senate elections. Stumping for incumbent GOP Senators Kelly Loeffler and David Perdue, both of whom face battleground reelection contests, the president encouraged Georgia voters to turnout for both lawmakers. Loeffler joined the President Trump at the rally, while Perdue remains in quarantine for exposure to coronavirus. Loeffler pledged to object to the certification of the Electoral College on Wednesday, and while Perdue cannot participate until he officially is the victor in his runoff contest, he urged his Senate colleagues to do the same.

I urge my colleagues to object. I stand with @realDonaldTrump. #GASen #gapol pic.twitter.com/kUXkQ5Nzfg

As Republicans hope for maximum turnout on Tuesday, President Trump told the crowd that Tuesday’s election could ultimately be “the most important of your life.” He praised Loeffler and Perdue as “fighters” for his agenda in the Senate, and urged Georgia voters not to let Democrats win in Tuesday’s runoff elections.

“Kelly fights for me. David fights for me,” he said of the Senators to a fired up crowd. “Don’t let the Democrats steal the U.S. Senate.”

The president deemed Democrat Senatorial candidates Raphael Warnock and Jon Ossoff two of “the most extreme liberal candidates,” ahead of Tuesday’s tight races. He pointed to Warnock’s praise of Marxism, as well as troubling comments about the military and law enforcement. The president ripped Ossoff for being “weak on China,” citing to his business ties to the Chinese Communist Party (CCP).

The president challenged voters to “send a message” to Democrats seeking control of the upper chamber, a result that would ultimately give President-elect Joe Biden an avenue to sign far-left legislative measures into law.

"Tomorrow, our entire nation is counting on the people of Georgia...the fate of our country is at stake -- it's in your hands," President Trump told the crowd. "If you want to send a message to the powerful forces that are trying to control your country, you must get out and vote tomorrow for David Perdue and Kelly Loeffler."

As control of the Senate is in play, Loeffler and Perdue hope to defend their seats and the GOP’s majority on Tuesday.