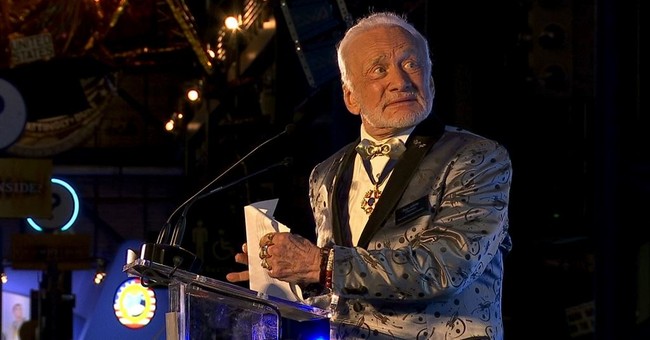 Celebrated U.S. Astronaut Buzz Aldrin threw his support behind Sen. Martha McSally (R-AZ) in her battleground reelection campaign, over retired astronaut Mark Kelly (D). Most famously known for piloting the Apollo 11 Lunar Module in 1969, Aldrin was one of two men to first walk the moon.

12 o’clock is straight ahead. 6 o’clock is behind. Fighter pilots understand what “check six” means in FTR lingo talk.
Martha, wave as you move ahead past Mark, to 12 o’clock, and you win for Arizona!

The incumbent GOP Senator applauded the “absolute honor” of having Aldrin’s endorsement, in what is one of the most competitive races on November’s map for Republicans.

Absolute honor to have the support of hero astronaut Buzz Aldrin in this mission!

American hero @TheRealBuzz knows I’m a fighter for Arizona and our freedoms—that’s why he’s supporting my campaign.

Buzz, we are excited to have you on the team. Let’s finish this fight! pic.twitter.com/gCZkz6oqyT

Though Kelly touts his astronaut career in his campaign to unseat Sen. McSally, the Democratic challenger was discovered to have multiple business ties to China and the Chinese Communist Party. Sen. McSally's reelection is rated as "Lean Democrat" by Cook Political Report and Real Clear Politics.