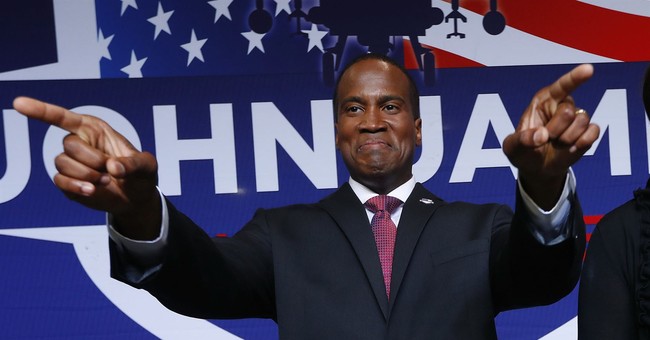 Michigan GOP Senate candidate John James received a crucial endorsement from the Detroit News editorial board, which he also received during his 2018 bid for the Senate, but endorsed incumbent Democrat Senator Gary Peters in his 2014 run. The board noted that James holds an “important perspective” as the country navigates racial inequity.

"This is the right moment for John James," the board wrote. "He is waging his campaign at a time when America is trying to work through its long history of racial animus. As an African American, a conservative, and a Republican, James would add an important perspective to policy-making aimed at vanquishing racial inequity."

It is an honor to have the endorsement of @detroitnews. Michigan stands to gain increased influence in the Senate, representation for underrepresented Americans & a leader on COVID recovery and economic growth. We have the choice between a war fighter or a gaslighter. #LetsFlyMI https://t.co/rfaJJuu8Ok

As the major Detroit newspaper picks James over Sen. Peters in the battleground Senate race, polls are tightening in favor of the rising GOP star. In what was once viewed as an easy hold for Democrats on November’s Senate map, polling averages show James closing in on the incumbent, and even leading in one new poll.

Sen. Peters has struggled with name identification throughout his reelection campaign, with 40 percent of voters not recognizing Michigan’s freshman Senator by name. The race is rated as a toss-up by RealClearPolitics, but the momentum is clearly on James’ side with less than two weeks until election day.