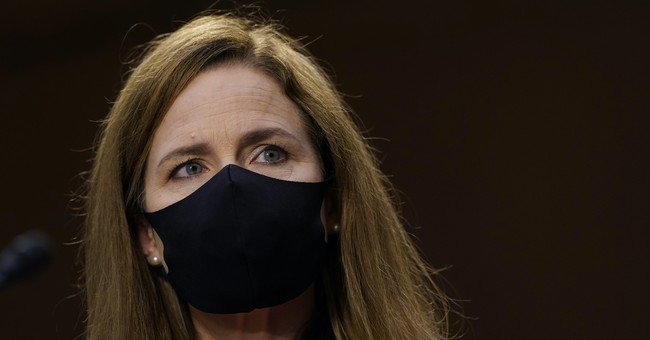 In the second day of confirmation hearings before the Senate Judiciary Committee, Senator Ben Sasse’s (R-NE) questioning gave Judge Barrett the opportunity to set the record straight on what originalist jurisprudence is. Democrats have done their best work to villainize the popular judicial philosophy that respects the Constitution as written.

Asked why the meaning of the law does not change with time, Judge Barrett  reminded those watching that “the law stays the same until it is lawfully changed,” and that the role of the judiciary is not to legislate.

Sen. @BenSasse: "Can you unpack for us why it's so important that the meaning of the law doesn't change with time?"

Judge Barrett: "The law stays the same until it is lawfully changed...it is not up to judges to short circuit that process by updating the law, that's your job." pic.twitter.com/jkr4ss9hHl

Democrats have spent much of Judge Barrett’s confirmation insinuating that the courts make the laws, when legislating is Congress’ primary role, as she reminded the room:

“It [lawmaking] is not up to judges to short-circuit that process by updating the law. That’s your job,” she said in response Sen. Sasse’s question about the role of the courts.

Judge Barrett: “Justice is blind. We all dress the same. Once we put on the black robe we are standing united symbolically, speaking in the name of the law. Not speaking for ourselves as individuals.” pic.twitter.com/64ENNBlG7h

Throughout her confirmation process, Judge Barrett has made it clear that a judge's personal policy preferences should have no stake in the way that they rule, and that the law should be the only factor considered.

JUDGE BARRETT on originalism: "I interpret the Constitution as a law. That I interpret its text as text. So that meaning doesn’t change over time and it’s not up to me to update it or infuse my own policy views into it.” https://t.co/KLKdKXcZnE pic.twitter.com/T0c9rkoQvB