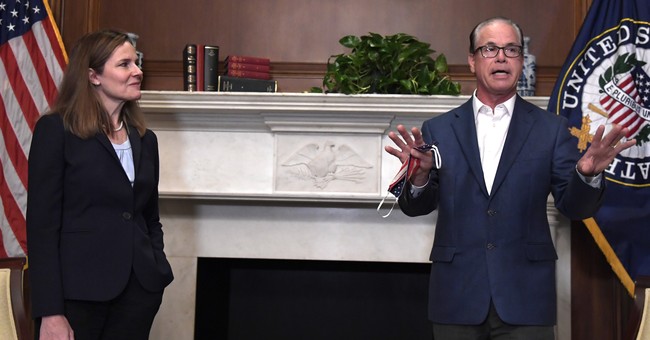 Sen. Young exposed Democrats’ despicable attacks on Judge Barrett’s religion, which some on the Left deem disqualifying for a seat on the highest court.

"I can tell you in IN & much of the country, faith is viewed as an asset in a public servant, not a liability. As ND Pres Fr. Jenkins reminded us then, being a person of faith doesn't interfere with one's ability to apply the law." pic.twitter.com/w2hJbjQYpq

If confirmed, Judge Barrett will be the first mother of young children to sit on the Supreme Court. Sen. Braun praised the 48-year-old jurist’s sterling legal credentials and commitment to her family.

On the bench, her qualifications are beyond question. Off the bench, she has lived a life rooted in the heartland values that guide us: faith, family, community, and respect for the law. pic.twitter.com/OkXkgnVGn4

Praise for Judge Barrett comes from colleagues and peers from both sides of the aisle. Her confirmation to the Supreme Court continues this week as the Senate Judiciary Committee evaluates her nomination.