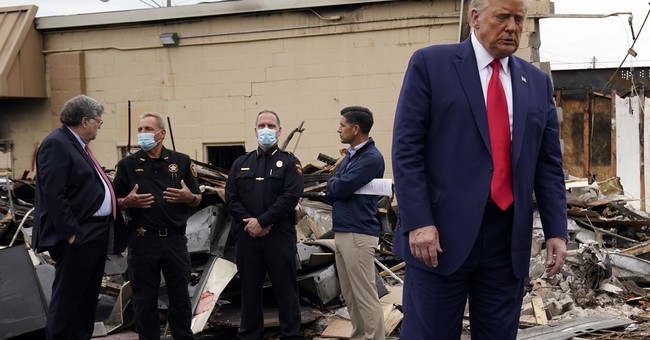 President Trump visited Kenosha, Wisconsin on Tuesday as the city sees devastating damage as a result of civil unrest led by violent, left-wing activists. The president toured properties burdened by violent riots and looting, and vowed to assist the businesses' rebuilding efforts with millions of dollars in financial support for law enforcement, small businesses and public safety.

Trump just announced some financial support for Kenosha and Wisconsin.

President @realDonaldTrump on violent riots in Kenosha, #Wisconsin: “These are not acts of peaceful protests, but really domestic terror." pic.twitter.com/9No15jEPDY

AG Bill Barr speaks in Kenosha: "We do not allow judgments to be reached because of mob violence." pic.twitter.com/ccsZ7AW6l8

President Trump’s visit defied the wishes of Democrat leaders, who refuse to acknowledge the severity of the violence or condemn the left-wing groups behind the devastation. The National Guard has been deployed at the president’s command, and over 200 federal agents from the FBI, ATF and U.S. Marshals Service are on the ground to help local law enforcement. The Trump administration’s “Operation Legend” sent over 1,000 federal law enforcement officials to a handful of cities plagued by violence and crime.

By contrast, Joe Biden has yet to schedule a visit to Kenosha, and instead blamed President Trump for the violent riots. The former vice president’s campaign said that Biden hopes to not disturb the “peaceful nature” of the riots in Kenosha.

Share this on Facebook
Tweet
The GOP Might Have Found Their Winning Midterm Message...Thanks to the CDC
Matt Vespa
Psaki Insists Biden Isn't Shutting Down America Again, But Says He Won't 'Take Options Off the Table'
Spencer Brown
Disease Expert Tells CNN: Most Masks Don't Really Work Against Wuhan Coronavirus
Katie Pavlich
These Tweets on How to do COVID Outreach to Black Americans from a White Liberal Cannot Be Real
Matt Vespa