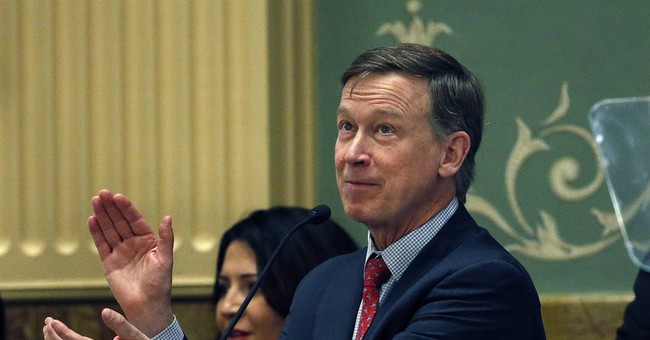 Former Governor of Colorado John Hickenlooper (D) is facing more scrutiny for the debacle surrounding the ethics violations he was found guilty of in June as he navigates his bid for the Senate; in addition to violating his state’s constitution, Hickenlooper used a taxpayer-funded 9/11 relief reserve to fund his legal defense, to the tune of $525 per hour. Congressman Doug Lamborn (R-CO) penned a complaint to Acting Inspector General of the Treasury Department, Richard Delmar, asking for a federal investigation into whether or not Hickenlooper’s use of the fund for such purposes was legal.

The fund, created in 2003 via federal dollars to alleviate economic damage caused by 9/11, was intended to be used for essential government functions, not discretionary expenditures. Hickenlooper used the fund to finance legal services in order to avoid a confrontation with Colorado’s Independent Ethics Commission (IEC), a nonpartisan panel that eventually held Hickenlooper in contempt and found him guilty of ethical violations.

“...this complaint provides evidence that Governor John Hickenlooper misappropriated Federal Tax Relief Act of 2003 funds, granted to the State of Colorado for 9/11 recovery programs, to retain a political attorney at a rate of $525 per hour to defend himself against a state ethics complaint that alleged personal misconduct,” he writes. “The federal grant fund at issue, the Federal Tax Relief Act of 2003 (“Act”), explicitly prohibits Governor Hickenlooper’s appropriation to pay for an attorney to defend him against state ethics violations. The Act expressly limits the use of federal funding to: payments for ‘essential government services,’ or payments for ‘federal intergovernmental mandate,’ and the payment must be authorized by the state budget.”

On the surface, Hickenlooper’s use of the funds does appear to be a misuse of taxpayer dollars intended for essential governmental purposes. Taxpayers should not be bankrolling legal defense for an ethics standoff that Hickenlooper created for himself.