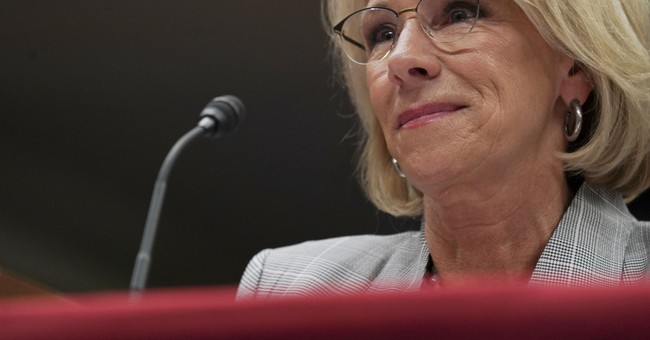 Education Secretary Betsy Devos brought justice, free speech and due process back to the forefront on Tuesday when she announced new guidelines for Title IX on college campuses. As she promised at the beginning of her tenure, Sec. Devos adjusted the language of Title IX, the federal decree for the adjudication of sex crimes on college campuses, to further protect the accused.

Today @usedgov took historic action to ensure all students are safe to learn and achieve. Our new #TitleIX rule provides new and meaningful protections for survivors of sexual harassment/assault & balances the scales of justice on campuses across America: https://t.co/gG5VCn1U4E

Two years ago, I promised to address the scourge of sexual misconduct on our nation’s campuses. The new #TitleIX regulation delivers on that promise. It treats all students fairly and holds all schools accountable if they fail to protect their students: https://t.co/HEuugNWBe0

"So severe, pervasive, and objectively offensive, and that so undermines and detracts from the victims’ educational experience, that the victim-students are effectively denied equal access to an institution’s resources and opportunities."

Perhaps the most important changes made by Secretary Devos surround due process rights for the accused. Sexual assault and rape are growing issues on college campuses, undoubtedly, but institutions have trended away from due process and unfairly favored the accusers since the Obama-era guidelines, which were also slanted toward accusers. At the forefront of the Obama Administration's flawed guidance was the Dear Colleague Letter, which imposed weak standards for evidence in sexual assault cases on college campuses. First unveiled in 2011, the letter instructed institutions to require a "preponderance of the evidence" standard for determining guilt, rather than the "beyond a reasonable doubt" evidentiary benchmark used in courtrooms. Sec. Devos and the Office of Civil Rights within the Department of Education rescinded the letter in 2017.

Sec. Devos’s changes not only demand a reasonable evidentiary standard, but her changes also explicitly protect the due process rights of the accused and gives the accused party the right to face and cross-examine their accuser, as would be the procedure in a courtroom.

The regulations guarantee critical due process protections that Americans recognize as essential to securing justice, but that have for too long been denied to students accused of sexual misconduct on college campuses.

* A requirement that all relevant evidence receive an objective evaluation.

The regulations also affirm institutions’ ability to use the “clear and convincing” standard of evidence.

Sec. Devos has received criticism from women’s groups for shifting Title IX regulations, with many claiming that victims will suffer as a result of the changes to Title IX; in reality, Sec. Devos’s changes only ensure fairness to both parties in sexual misconduct disputes. Indeed, Sec. Devos’s new guidelines also scrapped the Obama-era mandate that University officials are required to report misconduct, even without the consent of the potential victim. Not all students want to report and endure the adjudication process in these cases, but under previous guidance the agency was exclusively given to University officials. Under Sec. Devos’s guidance, students are given autonomy to proceed as they wish, or to not report if they so choose.

Sec. Devos will inevitably face backlash for her bold action in defense of the accused, and Democrats will claim that these changes to previous guidance, which was not consistent with the judicial system, gives a win to sexual abusers. In reality, Sec. Devos’s changes to Title IX represent a win for freedom of speech, due process and fair adjudication of sex crimes.