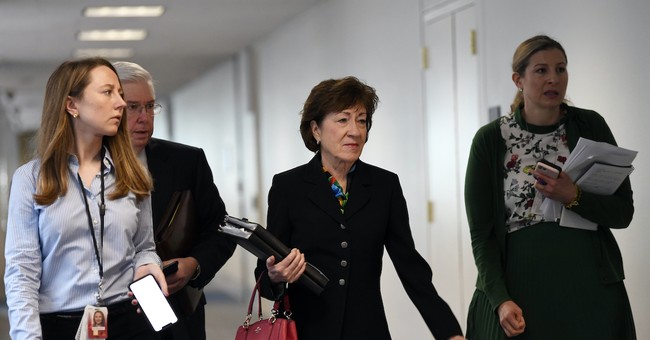 After initially being boxed out of speaking on the Senate floor, Senator Susan Collins had a harsh response to Senate Minority Leader Chuck Schumer’s (D-NY) partisan rhetoric. Sen. Schumer is doing a huge disservice to the American people by delaying the CARES Act, a bipartisan relief package, and Sen. Collins was having none of it:

Sen. Susan Collins: "I cannot believe that the answer from our friends from the other side of the aisle is delay, delay, delay. No sense of urgency."

.@SenatorCollins: "I ask unanimous consent that proceedings under the quorum be dispensed with."

Sen. Sasse (presiding): "Is there objection?"@SenSchumer: "I object."@senatemajldr: "Oh, come on."

Collins: "This is unbelievable." pic.twitter.com/Bg3pBv09Ch

Sen. Collins eviscerated Sen. Schumer's delay tactics, which do nothing but bring more harm to the American worker:

The American people deserve to have both Republicans and Democrats on their side during this growing economic crisis. A global health pandemic knows no partisan ideology; all Americans are affected by this crisis, and the economic downfall needs to be addressed in a bipartisan manner.