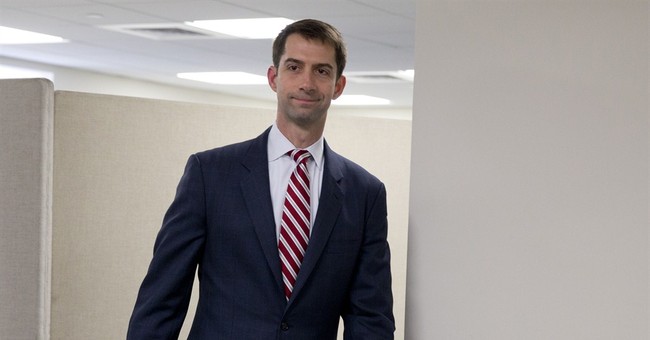 “Here’s the proof that Beijing is sick: the same Chinese Communist Party that sat on the sidelines for weeks while coronavirus plagued Wuhan sprang to action when Chairman Xi’s feelings were hurt by a headline that nobody in China had the freedom to read. The Wall Street Journal owes the Chinese Communist Party nothing. Chairman Xi owes the Chinese people an apology for his coronavirus cover-up.”

Original Post: Sen. Tom Cotton (R-AR) has voiced criticism against the Chinese government amidst the outbreak of the coronavirus. The New York Times published an article framing Sen. Cotton as a conspiracy theorist for merely suggesting that an accident in a laboratory could be the reason for the outbreak, given the virus’s origin is still unknown, and experts have not ruled out this possibility. The Washington Post joined in on the smear as well, falsely claiming that the possibility of a laboratory accident had been debunked.

Sen. Cotton also came to the defense of the First Amendment this morning, after the Chinese Foreign Ministry expelled three Wall Street Journal reporters based in Beijing. The Ministry attributes the reporters’ expulsion to a recent opinion column published by WSJ which was critical of the Chinese government’s handling of the coronavirus debacle.

“The Chinese Communist Party is complaining about newspaper headlines while the Chinese people suffer and die from coronavirus. Walter Russell Mead speaks more truth in one column than the CCP does in a year. Its dishonesty caused this outbreak to spiral out of control. Now the Party has chosen dishonesty yet again by kicking out foreign journalists over a fake provocation,” Sen. Cotton said in a release.

Sen. Cotton has been one of the sole voices in Washington willing to hold the Chinese government, a regime which has a questionable track record, to say the least, accountable. Every lawmaker who claims to favor freedom of the press should follow Sen. Cotton’s example and condemn the Chinese Foreign Ministry’s expulsion of journalists.