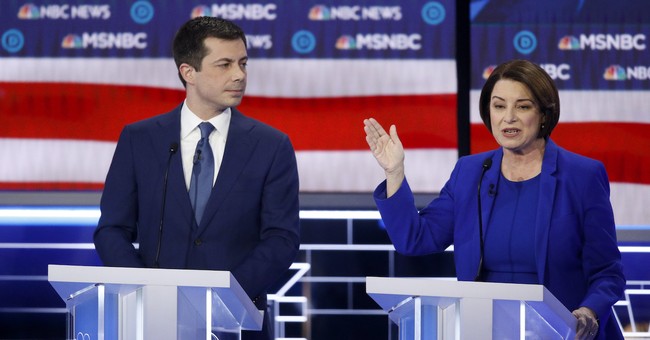 Six Democratic candidates for president took the debate stage in Las Vegas tonight ahead of Saturday’s caucuses. Sparks flew from the beginning; with the exception of former NYC Mayor Michael Bloomberg, every candidate came to play, and spared no attacks on other candidates.

Sen. Amy Klobuchar (D-MN) has seen a recent surge in the polls after a strong performance in New Hampshire. Sen. Klobuchar was called out by a debate moderator for not knowing the name of Mexico’s president in a recent interview, and therefore having little credibility on foreign policy related to Mexico:

Steyer and Klobuchar did not know the name of the president of Mexico, in interviews w/ @TelemundoNews
“I forget,” says Steyer.
"Can you tell me his name?"
Klobuchar: “No."
Pete knew. pic.twitter.com/gUBqyxLfUW

When asked about this blunder, Sen. Klobuchar visibly checked her notes to recall the name of the president of Mexico, Andrés Manuel López Obrador, as well as the president of Honduras, Juan Orlando Hernandez, as the Trump campaign pointed out:

WATCH: Amy Klobuchar looks down and checks her notes in order to name the presidents of Mexico and Honduras. #DemDebate pic.twitter.com/4Pxl0ehaqI

.@PeteButtigieg took it to Klobuchar for trivializing not knowing the Pres of Mexico's name even though she consistently touts Washington experience and sits on foreign affairs committees #DemDebate

The debate catfight continues on NBC, and you can follow along with us here.