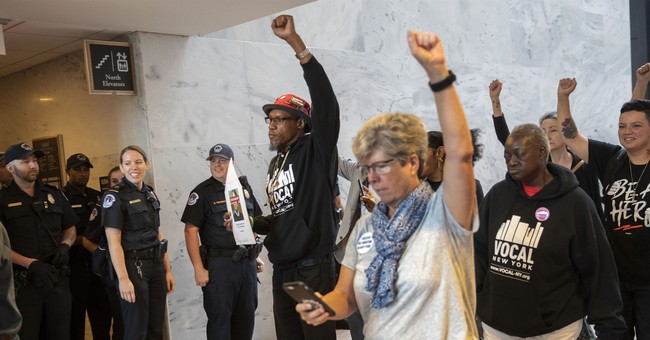 After a grueling week of testimony, after which his confirmation seemed absolute, Judge Brett Kavanaugh is facing allegations of attempted rape, and along with the claims, a vicious smear from the media and left-wing interest groups. The allegation, put forth by Dr. Christine Blasey Ford, claims that Kavanaugh pushed himself on Dr. Ford at a high-school party over 30 years ago. Dr. Ford disclosed her alleged story to Senator Diane Feinstein, a ranking Democrat on the Senate Judiciary Committee, back in July when Judge Kavanaugh was initially nominated to the high court by President Trump. Rather than making any attempt to handle this charge made by Dr. Ford, and afford her the right to be heard, Feinstein chose to sit on the letter until after Judge Kavanaugh’s hearings.

Still, left-wing interest groups frame Senate Republicans, who invited Dr. Ford to testify in any capacity in which she felt comfortable, as the villians. The Senate GOP proposed that the committee hear from both Judge Kavanaugh and Dr. Ford in the interest of due process and transparency for the public. This was not enough for far-left groups such as NARAL, Planned Parenthood and the Women’s March. Particularly, the Women’s March, framed the GOP’s push for Judge Kavanaugh to have the opportunity to defend himself, and Dr. Ford to be able tell her story, as misogyny:

.@maziehirono and @SenGillibrand are holding a press conference with alums from the Holton-Arms school, where Dr. Blasey-Ford attended.

There’s nothing stronger than women who band together in the face of injustice and misogyny. #WeBelieveChristine #CancelKavanaugh pic.twitter.com/UcHtaMPzxx

Despite what these interest groups may think, the Judicial System does not presume guilt. The United States was built on the principle of presumed innocence until guilt is proven. These groups would rather see a man who has served the public for 30 years, with a stellar record of intelligence and integrity in his jurisprudence, have his life and career ruined before his guilt is proven, rather than conduct a fair investigation for these allegations.

It remains to be seen whether or not Dr. Ford will come before the Senate Judiciary Committee to testify against Judge Kavanaugh. Against the wishes of Senate Democrats, Chairman Chuck Grassley and Majority Leader McConnell will hold a transparent process that is fair to all parties involved.