President Trump Returns to Pennsylvania to Stump for Barletta, Gives His Opponent a Nickname 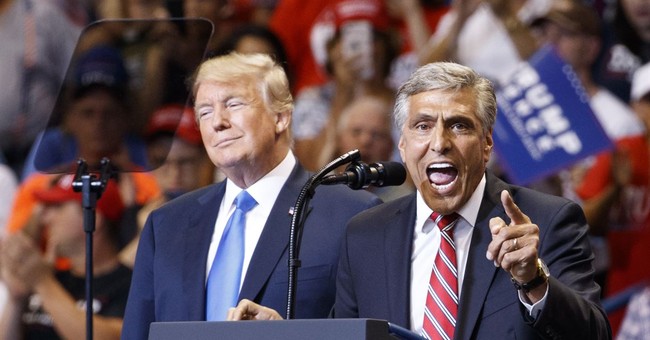 President Donald Trump paid a visit to supporters in the Commonwealth last night, speaking to a crowd of thousands of enthusiastic voters. The President held a rally for one of his earliest supporters, Pennsylvania Senate Candidate and current Congressman Lou Barletta, in the hometown of both Barletta and his opponent, two-term Pennsylvania Senator Bob Casey Jr.

President Trump immediately went on the offense for Barletta, citing his strong policy stances and early support for the Trump campaign:

“We need Republicans. We need Lou Barletta,” he said.

The crowd of Trump and Barletta supporters immediately echoed support:

In a arena full of Pennsylvanians who vehemently support his bold agenda, President Trump attacked Senator Casey for his lack of transparency with constituents, and severe leftward shift in ideology. Casey initially ran for the Senate in 2006 in the shadows of his Father, the late Governor Bob Casey Sr., on a strictly pro-life, pro-gun, economically moderate platform which was immensely popular among Pennsylvanians. Since President Trump destroyed the odds and beat the presumed winner of the 2016 General Election, former Secretary of State Hillary Clinton, Pennsylvanians have seen their two-term Senator abandon his once-moderate values and fully embrace the progressive agenda. Senator Casey, once a staunchly pro-life Democrat, now fully supports the nation’s largest abortion provider, Planned Parenthood, and refuses to fight the radical abortion agenda of his Democratic colleagues. Casey also is a strong voice for radical immigration policy, and is against both the Second Amendment Rights which Pennsylvanians hold dear and the historic Tax Cuts and Jobs Act, a policy which has given financial relief to Pennsylvania workers across the state.

Since his initial Senate bid, Casey has championed his moderate platform and image, and his base of blue collar supporters. But for ideologically moderate, blue-collar Democrats who voted for President Trump and have historically supported Casey, supporting the sitting Senator in the contentious election year may not be a given; Casey has been at the forefront of the obstruction of every single item on President Trump’s agenda. The Senator even went as far as to publicly reject the President’s Supreme Court nominee, before Judge Kavanaugh’s name was even released.

Although Casey has historically enjoyed the name recognition of the popular, pro-life legacy of his father, accountability will be present in the voting booth in November. The Senator is directly contradicting the platform that put him in office and that voters associate with the Casey name. Radical left-wing policies do not resonate with the average Pennsylvania voter, and Casey’s warm embrace of the Democrats’ liberal agenda will not do him any favors in the ballot box in November.

“Don’t fall asleep as we talk about Sleeping Bob,” The President said.

Congressman Lou Barletta and Senator Bob Casey will face off for the Pennsylvania Senate Seat in November.