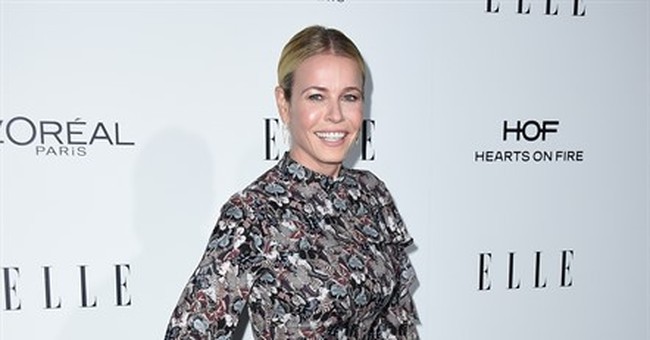 Despite the false narrative that Speaker of the House Paul Ryan created a sexist dress code in the Speaker’s lobby being debunked, radical feminists are still in an uproar over the century-old policy. In all of her eloquence, Chelsea Handler lambasted Ryan for enforcing the policy in place, comparing Capitol Hill to Abu Dhabi:

Paul Ryan enforcing dress code in Speaker’s Lobby in the U.S. Capitol that bans women from showing their shoulders. Welcome to Abu Dhabi.

Perhaps Handler is unaware that Abu Dhabi, the second largest city in the United Arab Emirates, gives women virtually no rights. The UAE legislated legal female genital mutilation and allowed women’s autonomy over their sexual choices to be out of their individual hands, including coming forward about sexual assault and rape cases. For Handler to joke about such a detrimental treatment of women, while claiming to be a champion feminist, is despicable. Women in the Middle East would love to have the freedoms that American women have, and certainly would not mind wearing a sweater or jacket in a professional setting, given that they themselves are required to be covered head to toe.

It is difficult to understand why feminists on the Left are so taken back by the enforcement of this dress-code policy, given that it is the textbook definition of equality. Male reporters are required to wear a jacket and tie in the Speaker’s Lobby, so, if equality is the goal, why should women not be required to cover shoulders also?

The dress-code is not demeaning to women. It is not objectification. It is not sexist. The policy is a simple demand for respect from female reporters and lawmakers. Repudiating this traditional dress-code, which is pretty standard for a professional setting, is the absolute peak of entitlement by feminists. Whining about and calling sexism on a century-old policy does nothing to further the feminist cause. In fact, this childish behavior is a bad look for women.

If equality of the sexes were really the ambition of the modern feminist movement, its members would not be slamming the Speaker of the House for enforcing an equality-based dress-code that calls for respect from both men and women.