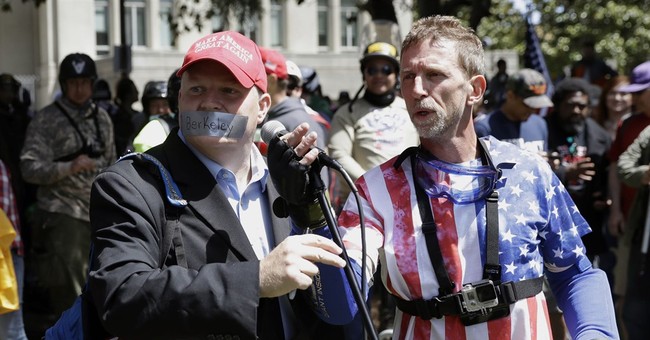 The free speech opponents at the University of California, Berkeley, are under fire for impeding on their conservative students’ First Amendment rights.

“...By imposing an unconstitutionally vague policy concerning so-called “high-profilespeakers,” and selectively applying that impermissibly vague policy to burden or ban speaking engagements involving the expression of conservative viewpoints, Defendants have deprived YAF and BCR of their constitutional rights to free speech, due process, and equal protection. Accordingly, YAF and BCR seek temporary and permanent injunctive relief to prevent Defendants from continuing to muzzle Plaintiffs’ constitutionally-protected speech, and to enjoin the Defendants’ transparent attempts to stifle political discourse at UC Berkeley…”

The university responded by claiming that they are “viewpoint neutral,” despite the fact that all evidence is stacked against them. The institution has no issue bringing liberals to speak on campus, such as Maria Echaveste, a former aid in the Clinton Administration, and Vicente Fox Quesada, the former president of Mexico.

The spokesman for Young America’s Foundation, Spencer Brown, called out Berkeley for the university’s delusional view of their own conservative suppression in a statement:

“This weak attempt by the University of California, Berkeley to brush off their egregious free speech violations is staggering but unfortunately unsurprising given their demonstrated pattern of suppressing the First Amendment rights of conservatives on campus,” he said.

The University of California at Berkeley is notorious for hatred of conservative voices, despite being coined the "birthplace of free speech". Young America’s Foundation, the Berkeley College Republicans and conservatives across the country, seem to be unwilling to back down from exposing Berkeley’s bias, and holding the university, a supposed institute for learning, accountable to inclusion.