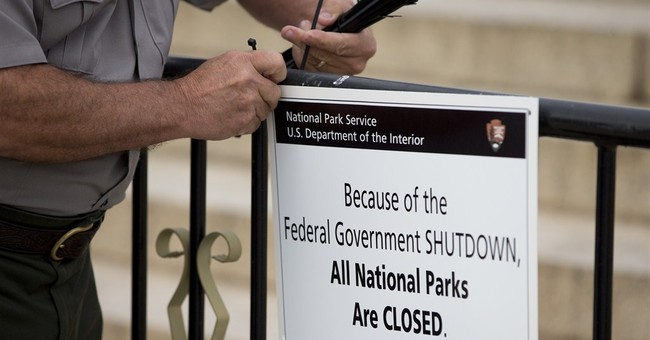 Jonathan Jarvis, Director of the National Park Service, cited the inability to maintain security as the primary reason for shutting down federal properties, including the open air WWII veterans' memorial. His statement at a recent Congressional hearing directly contradicts several earlier reports suggesting that extra security staff members were hired during the shutdown to erect and police physical barriers and that they were told to be as obstructive as possible.

Republican House Representatives Darrell Issa and Doc Hastings called for the hearing in light of the fact that the National Park Service's response to the federal shutdown extended to barricading open air parks and placing traffic cones along scenic overlooks like Mount Rushmore.

The director's full testimony to Congress can be found here, but it can be summed up as a non-apology blaming the inability of a furloughed workforce to meet the safety and security concerns of a "post-9/11 world" for the National Park Service's actions despite the fact that law enforcement officers, firefighters, border protections, and surveillance programs were maintained throughout the furloughs.

The American public is not going to buy Jarvis's thinly veiled references to terrorism when there were clearly enough staff members to throw families out of privately operated campsites, prohibit weddings, and stand in the way of veterans - all while losing revenue that could supposedly pay some of the security workers Jarvis thinks are necessary.

Critics pointed out that the government shutdown was unprecedented, but the National Park Service response was extreme:

"If they set precedent in 1995-96, why couldn't that precedent be followed today?" said Gregory Bryan, mayor of the town of Tusayan, Ariz., near the Grand Canyon. "I have a hard time believing it took them 10 days to figure out a new policy."..."The administration just wanted the American people to feel the pain of the shutdown in a very visible way," Bryan said.

One managing director of an independent business that operates on National Park property emphasized that the previous shutdown did not require her to cease operations as the recent one did:

"I don't know if Obama said go and [annoy] the American people," said Eberly..."But there was a shutdown less than 20 years ago. People remember that and what happened then. This situation is just bone-headed."

Jarvis is right that there is one crucial difference between the last shutdown and the present one, a difference that pushed the National Park Service to political theater and extremism. It is just not so much a "post-9/11 world" as a post-negotiation Washington.