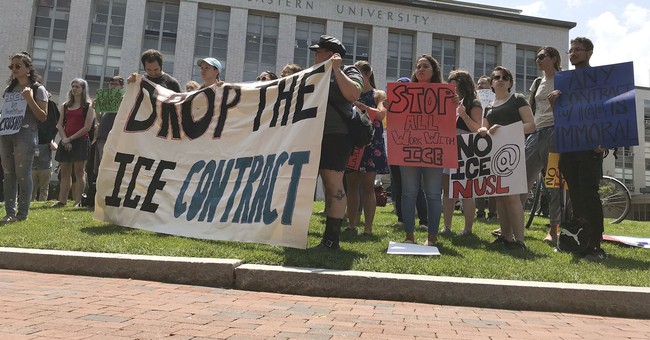 “...I’m hopeful the State of New Jersey and ICE can come to terms regarding this issue. Cooperation from the federal, state and local level is essential when protecting the public and ensuring that dangerous, undocumented immigrants are not released from jail in order to maintain the safety of our communities,” said Monmouth County Sheriff Shaun Golden in a letter obtained by Townhall which was sent on Tuesday.

Golden’s letter was in response to a missive from Veronica Allende, the state’s Director of the Division of Criminal Justice.

In a letter on Monday, Allende excoriated Monmouth County’s Sheriff Golden and Cape May County’s Sheriff Nolan. She suggested they had intentionally circumvented the spirit of NJ Attorney General Gurbir Grewal’s new rules by renewing agreements with ICE just before the deadline date of a directive that would have prevented it. Further, she warned them that the AG would issue another directive in August that would render moot the sheriffs’ efforts to continue cooperating with ICE despite the AG’s well-documented objections.

The directive to which Allende referred, called the “Immigrant Trust Directive,” was announced last November and had an effective date of March 15. It was supposed to stop local law enforcement from assisting ICE, in part, by requiring agencies to get the AGs permission before entering into or renewing arrangements with ICE to participate in ICE’s 287(g) program.

Golden and Nolan got in under the wire by renewing existing agreements with ICE in early March and February, respectively. Agreements for both were set to expire at the end of June.

Local law enforcement agencies that participate in the 287(g) program can assist ICE by alerting the federal agency if they determine that a prisoner they’re holding locally is also wanted federally by ICE. They can then detain the prisoner until ICE can pick them up.

Sheriffs Golden and Nolan’s law enforcement agencies are among 79 such agencies in 21 states ICE lists as participating entities with memorandums of agreement in the Jail Enforcement Model of ICE’s 287(g) Program.

The 287(g) Program “enhances the safety and security of communities by creating partnerships with state and local law enforcement agencies to identify and remove aliens who are amenable to removal from the United States.”

The program “allows state and local officers to act as a force multiplier in the identification, arrest, and service of warrants and detainers of incarcerated foreign-born individuals with criminal charges or convictions.”

Among many other rules, the directive required counties to secure written approval from the AG’s office prior to establishing or renewing 287(g) contracts with ICE. At the time he announced the ITD, 287(g) agreements were in place for 3 New Jersey counties—Monmouth, Cape May, and Salem—all of which were slated to expire on June 30, according to the letter from Allende.

Golden and Nolan, per Allende’s letter, renewed their agreements with ICE before Grewal’s directive went into effect. The effective date of the ITD was March 15. Nolan reportedly sought renewal of the 287(g) agreement in February and Golden began the process March 8.

Though they technically did not require the AG’s approval at the time they renewed their agreements, Allende’s letter indicates that Grewal, in effect, will require it anyway.

To receive permission from AG Grewal, applicants such as Golden and Nolan must jump through multiple hoops to justify their participation in the 287(g) program. Those hoops include: a cost/benefit analysis, an analysis of the impact of participation on law enforcement’s relationship with immigrant communities, an examination of neighboring jurisdictions’ non-participation in the program, a summary of the public’s views on participation based on at least one public forum hosted by the sheriff’s office, and two years of data outlining the types of assistance provided to federal civil immigration authorities.

Jumping through those hoops is no guarantee, however, that the AG, in his infinite wisdom, will grant permission.

As Allende’s letter concluded in thinly-veiled snark, “After reviewing your submission, our office will contact you if the Attorney General decides to reconsider his intention to issue a directive limiting the ability of...officers to exercise their law enforcement authority pursuant to a 287(g) agreement.” Emphasis added.

In other words, Allende appeared to be signaling that the AG’s office may well follow through on the threat to write a second directive definitively barring Golden’s and Nolan’s agencies from continuing their participation in the 287(g) program.

In reality, among other hand-tying rules, the ITD prevents NJ’s law enforcement officers from identifying and temporarily holding detainees wanted by ICE.

Local law enforcement’s use of the tools these 287(g) agreements make available can literally mean life or death.

That’s what it meant for Kate Steinle, who lost her life at the hands of an undocumented immigrant who had been deported five times but happened to live in the sanctuary state of California. Though ICE had issued a detainer on her killer and requested he be kept in custody until they could pick him up, authorities at San Francisco County Jail set him loose on April 15, 2015.

No one wants a repeat of that preventable tragedy.

When prisoners being held locally are discovered to be wanted by ICE, it only makes sense to let ICE know those where those prisoners are and to safely detain them in the local facility until ICE can take them into custody.

“We had three officers who were sent down to the national training center and were certified and became eligible to work the 287(g) system,” Nolan said in an interview last year, commenting on his opposition to the idea of New Jersey becoming, in effect, a sanctuary state. Officers so certified can access a federal database, streamlining the process to temporarily detain inmates who are wanted by Immigration and Customs Enforcement (ICE).

“The 287(g) program has been in effect at the Monmouth County Correctional Institution for 9 years. The program is only instituted at the correctional facility on incarcerated individuals brought to the jail by local law enforcement agencies,” said Sheriff Shaun Golden in a July 10 release. “It is highly regarded and essential, particularly in light of bail reform, as these individuals are charged with serious crimes.”

Golden said that of 7,845 inmates processed at the Monmouth County Correctional Institution in 2018, 40 were found to be undocumented immigrants, which works out to approximately half of one percent turned over to ICE within 24 hours.

“Law enforcement throughout Monmouth County never wants to be faced with a situation where a dangerous, undocumented immigrant is released from jail and poses a threat to a community,” Golden concluded.

Golden indicated in his response to Allende that he will, with the assistance of ICE officials, submit the requested documents and data to Grewal’s office by July 30 justifying continued participation in the program.

However, the final decision on whether permission would be granted lies in the hands of AG Grewal, who has repeatedly and publicly made his opposition to Trump’s immigration-related policies crystal clear.

“With today’s directive, we are sending a message to those in Washington that we will not allow you to drive a wedge between our law enforcement officers and our immigrant communities,” Grewal said at the time he announced the ITD last November.

The exact timing on Golden’s extension of Monmouth County’s participation in the 287(g) program is unclear. In his letter to Allende, Golden states that the current Memorandum of Agreement “went into effect on March 8, 2019.”

Though ICE lists both Monmouth and Cape May counties as 287(g) Program participating entities as of July 2019, the agreements provided on ICE’s website show expiration dates of June 30, 2019 for both.

Adding to the mystery, Public Affairs Officer Emilio Dabul of ICE’s Enforcement and Removal Operations in Newark told Townhall, “when 287g contracts are renewed and cleared by ICE-ERO, they will be posted online.”

“Director Allende’s July 8 letter made clear that the Monmouth County Sheriff’s Office must submit the same information required from any law enforcement agency seeking to enter into a 287(g) agreement, including multiple years of data, a statement of justification, and the summary of at least one public hearing on the issue.  The Attorney General’s Office will review the submission once it arrives,” OAG spokesperson Peter Aseltine told Townhall in an email on Wednesday.

Some in local media are muddying the waters by misreporting the facts as tensions rise in anticipation of ICE launching raids in a number of cities across the United States.

News 12 New Jersey, for example, incorrectly reported on Thursday that Salem County was among the jurisdictions that had renewed their 287(g) agreements with ICE.

Salem County Correctional Facility's warden John Cuzzupe told Townhall that their 287(g) agreement with ICE expired June 30, and they did not renew it.

The Star-Ledger is in a war-of-words with Essex County’s Executive, Joseph N. DiVincenzo, Jr., over the Ledger’s coverage of a Department of Homeland Security’s Office of Inspector General report on an inspection at the Essex County Correctional Facility last year. The facility is used, in part, to house ICE detainees.  Star Ledger staff described the facility as a “crudbucket” in an opinion piece last month. DiVencenzo takes issue with that characterization, and for good reason.

“In anticipation of the Trump Administration’s threatened ICE raids, we are proactively reaching out to our immigrant communities to make sure they know we stand with them and are prepared to do whatever we can to protect them," said New Jersey's Governor Phil Murphy in a Friday morning statement.

“Let’s be clear: The Trump Administration’s fear-mongering is un-American and dangerous. These raids do not make us safer; they will only make the work of local law enforcement more challenging and increase fears in our hardworking immigrant communities," the statement continued.

“Any family who needs legal representation should know there are many pro bono legal services available to them. We will be doing everything we can to highlight these resources and to make sure our immigrant communities know their rights and feel at home,” Murphy concluded.

Appended to the statement were various "resources" including the National Immigrant Justice Center's publication entitled "Know Your Rights: Preparing for ICE Raids and Other Immigration Enforcement Actions."

Receiving reports of attempted but reportedly unsuccessful ICE enforcement actions in Sunset Park and Harlem.@NYCImmigrants and advocates are connecting with residents and distributing resources door to door.

Remember: you have rights. Call 311 and say ActionNYC for help. pic.twitter.com/OZwpxlm30d

One thing is certain. Things are heating up in New Jersey over immigration-related issues, and the situation will likely become increasingly acute as ICE carries out its duty to keep Americans safe.