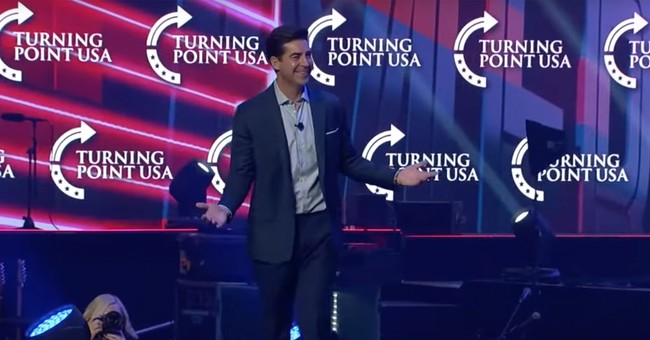 Did conservative Fox News commentator Jesse Watters call for violence against Dr. Anthony Fauci during a speech at a conservative political conference?

Viewers of CNN's "New Day" on Tuesday morning would likely be left with that impression. They would believe that the Fox News host called on Americans tired of Dr. Fauci's lies regarding the National Institutes of Health funding dangerous gain-of-function research at the Wuhan Institute of Virology in Wuhan, China, to be violent toward the doctor.

"New Day" host John Berman cherry-picked a portion of Watters' remarks that were delivered to conservatives at a Turning Point USA conference and asked Dr. Fauci to respond. Of course, Berman left out vital context, thus portraying the portion of Watters' speech in the most negative light possible.

"On the subject of divisiveness, Dr. Fauci, I'm not going to play it because frankly, I think it's dangerous," Berman started. "But Jesse Watters, who is a Fox News entertainer, was giving a speech to a conservative group where he talked about you and suggested to the crowd that they 'ambush' you with what he said was some rhetorical 'killshot,' that was his exact word. I'm wondering, you know, how much that concerns you when you hear language like that about you and your well-being?"

Dr. Fauci responded, calling it "horrible" and stating that Watters should "be fired on the spot."

But was Jesse Watters actually calling for a real mob to "ambush" and "deliver a killshot" to the doctor, causing him physical harm? Or was he being metaphorical? And does Watters deserve to be fired?

By looking at the entirety of Watters' remarks, it's plain to see Watters is using a metaphor to talk about a type of interview where an unsuspecting public official is confronted on camera by a journalist or truth-seeking American and asked uncomfortable questions about their policies or past statements in order to elicit a reaction or catch them in a lie to create a viral moment.

"Let's just say Fauci comes to town. ... You got to ambush a guy like Fauci. Okay? This is how you do these ambushes like [Project Veritas'] James O'Keefe. You gotta be respectful because they'll turn the tables on you and have it blow up in your face," Watters said.

Not only did Watters tell the audience to be "respectful" if they ever confronted Dr. Fauci, but he addressed a specific "ambush," the type done by Project Veritas founder and undercover journalist James O'Keefe. O'Keefe's interactions asking prominent figures tough questions are nowhere close to violent. Do they make the subject of the interview feel awkward or nervous? Yes, and that's the point.

But what about Watters' mention of a "killshot"?

Think of all the times politicians are confronted by reporters and badgered with questions that they brush off or deliver incoherent responses to before ignoring the most important question from the reporter before slipping into a waiting vehicle and driving away or escaping behind closed doors.

The "killshot," as Watters describes it, is that final question the interviewer asks the caught-off-guard interviewee that is either impossible for them to answer or one the interviewer knows they will refuse to address. It is the toughest question, backed up by facts, that will leave an interviewee panicked and looking for an exit.

As Watters described, the "killshot" or hard-hitting question for Dr. Fauci would be, "Dr. Fauci, you funded risky research at a sloppy Chinese lab, the same lab that sprung this pandemic on the world. You know why people don't trust you, don't you?"

Watters went on to tell his audience this type of interview footage is what Fox News loves to receive, as it can change "the whole conversation of the country."

"I've authorized it, just make sure it's legal," he added.

The context surrounding Watters' remarks is clear. He's not calling for actual physical violence; he's calling for conservatives to go on offense and practice hard-hitting journalism, to ask the tough questions of individuals who get softball interviews on the mainstream media networks. But CNN and other outlets wanted to dial up the outrage.

To Fox News' credit, they're backing Watters. A spokesperson said in a statement, "Based on watching the full clip and reading the entire transcript, it's more than clear that Jesse Watters was using a metaphor for asking hard-hitting questions to Dr. Fauci about gain-of-function research and his words have been twisted completely out of context."

After receiving that statement, CNN still hasn't updated their story with the full context of Watters' speech, though the "violent" part is still quoted.

Greg Gutfeld, host of "Gutfeld!" and Watters' fellow co-host on "The Five," also came to his colleague's defense, tweeting, "If Jesse Watters wasn't a private citizen he could sue the sh** out of CNN. He was suggesting asking hard questions; CNN deliberately clipped it to fabricate a physical threat. Even libs agree. As CNN deny real crime, they create fake ones. You must fight back, or you're next."

Gutfeld also called on CNN's Berman to correct the record, saying, "Yo, John Berman - You seem reasonable. You must admit what you did was in error. Maybe they gave you the wrong tape, or edited, so you were tricked. But realize Jesse Watters was talking about the usual '60 Minutes'-style of asking questions. Not violence. Be a man: correct it. It matters."

So much for CNN's "Facts First" motto.

Watch Jesse Watters' speech in full below starting around the 2:15:00 mark.