LaVar Ball Says He Sent the President Sneakers, and Didn't Get a Thank You 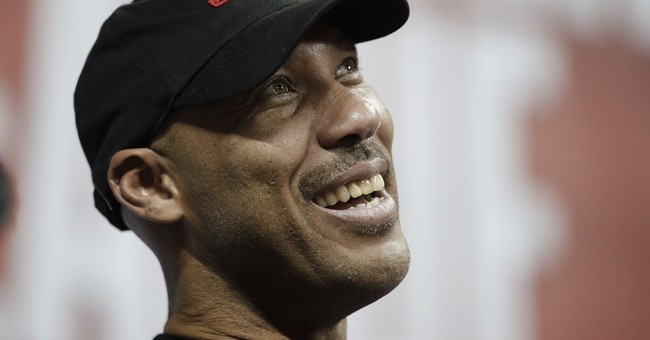 LaVar Ball, the father of NBA Lakers' rookie Lonzo Ball and the father of one of the three UCLA Bruins college basketball players who avoided prison time in China for shoplifting, says he sent President Trump three pairs of his company's new sneakers - and didn't receive a thank you.

The spat between Ball and the president started last month after the Trump administration was able to bring the three college athletes back home from China. Though the young players thanked President Trump and others in the administration for bringing them home, LaVar Ball did not. Ball's decision not to thank President Trump resulted in the president taking to Twitter to criticize him.

During a Tuesday morning interview with CNN's Chris Cuomo, Ball was asked, "Did you learn anything since then, about what the president did to help get your son out of trouble?"

Ball replied, "I haven't learned anything. It was just a conversation we had, and that was it."

He followed up by saying he sent the president a gift.

The ZO2s are a new brand of sneaker created by LaVar Ball and his company Big Baller Brand. According to the company's website, each pair of ZO2s sells between $495 and $695, depending on one's shoe size.

Chris Cuomo went on to joke with Ball, asking him if he sent the shoes to the right address. Cuomo followed up by asking if the sneakers were sent "return receipt requested." When Ball said they were not, Cuomo replied, "That was your mistake. Because we don't know if the president got the shoes, so we don't know whether or not he refused to say thank you."

LaVar Ball insisted that President Trump received the three pairs of sneakers and even said he believes the president is wearing them right now and dancing in the White House. That has yet to be confirmed.

Watch the clip of the bizarre interview below.

LaVar Ball says he sent President Trump three pairs of red, white and blue shoes to “show him that we’re patriotic” and “didn’t get a thank you” pic.twitter.com/26DAafuViC