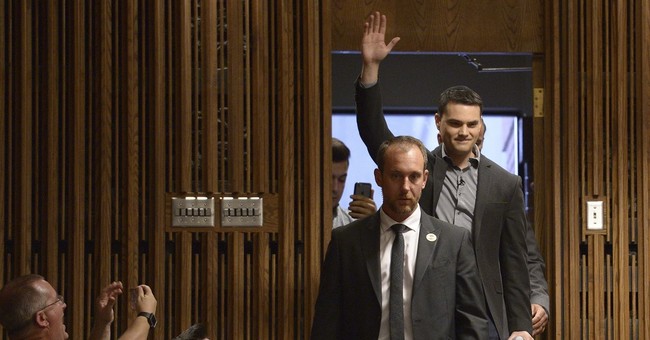 Coaston argues that Shapiro is, in essence, a provocateur whose intent is to trigger progressive students on campuses that are known to be left-leaning just so he can reinforce what students on the right believe. She argues that Shapiro's shtick panders to conservatives, but she conveniently ignores the fact that he welcomes debate and takes the time to engage with those who disagree with him. Shapiro's speaking engagements are open to anyone who may or may not have a different political perspective from his own, and he asks those who think differently to fill up seats. It just so happens that most of the time when those who disagree with him attend, they attend outside the auditorium to protest a speech they won't take the time to listen to. When the Q&A session starts at the end of his speaking engagements, Shapiro allows those in attendance who disagree with his conservative perspective to ask their questions first.

To accuse Shapiro of pandering is comical. Pandering, by definition, means telling people what they want to hear, and Shapiro's entire career has been focused on doing the exact opposite. He doesn't care about what people want to hear or how people feel about what he says. Whether his listeners are conservative or liberal, it doesn't matter to him. Shapiro continually reminds people that facts don't care about their feelings.

Facts don't care about your feelings.

In the op-ed Coaston states:

What Mr. Shapiro does on campus is shadow boxing meant to pander to his conservative fans whose values dominate mainstream American culture. If he wanted to be genuinely brave, he’d challenge some of the wrongheaded ideas held by his right-wing fans.

Coaston says Shapiro panders to conservatives whose values "dominate mainstream American culture"? This is news to me and, probably, would be news to Ben Shapiro too. What conservative values dominate mainstream culture, exactly? Coaston doesn't take the time to give examples and, off the top of my head, I can't give any either. American culture is becoming more progressive by the day.

Hilariously, Coaston goes on to state that if Shapiro were "genuinely brave," he'd go after people on the right. Shapiro does precisely this, all the time. Shapiro was critical of then-candidate Trump since day one and he now maintains that objectivity with President Trump and his hardcore base. All one has to do is look at Shapiro's Twitter feed to see he strives to hold the right and left accountable for their words and actions. Yet at the same time, Shapiro is completely fair to the president when Trump does something to better the country.

Shapiro referred to Trump as the "orange god-king" during the Republican primaries, has come up with the "Good Trump vs. Bad Trump" analysis when it comes to the president's decision-making, and has publicly stated he did not vote for Donald Trump in the 2016 presidential election. What more does Coaston want Shapiro to do that he is not doing already? It appears she simply wants him to stop espousing conservative views unless he is going to be critical of them himself.

In an attempt to show that Shapiro only cares about telling people what they want to hear or believe, Coaston gives the example of The Daily Wire, Shapiro's news organization, uploading an animated video containing graphic and offensive content on Columbus Day. Shapiro apologized for the video, which he did not give the "green light" for, and had it removed.

I reached out to Mr. Shapiro to ask him about the Columbus Day video. He sent over a statement apologizing for it, saying it “engaged in broad-based stereotyping,” which he also posted on Twitter. In the email, he added, “I think there’s a lot of political ground to be gained in pandering to your own side and confirming their biases. I strive not to do that.”

And yet he, and vast swaths of the conservative right who decry “groupthink,” still do. To tell strident college students to examine their own politics and embrace real debate is brave. To insist on the same from those on the right would be even more courageous.

Shapiro apologized for the video, did the right thing by having it removed, and even stated he understands how pandering to one's base can be damaging and stated he tries to avoid what Coaston accuses him of doing on a consistent basis. Despite his statement, Coaston immediately turns around and, without saying it outright, calls Shapiro a liar.

Coaston goes on to propose that college students should think about what they believe in and engage in "real debate." Many conservative students would like to engage with those on the left and this is what Shapiro encourages. Many conservatives go to Shapiro to learn more about why they believe what they believe so they can have such debates. Others listen to him to have their own views challenged as not everyone who's on the right agrees with Shapiro on everything.

As a man who has a constitutional law degree from Harvard, Shapiro knows what he believes, and his goal is to challenge the beliefs of others and speak to those who will listen. Shapiro can't help it if students on the left won't take the opportunities he gives them. Right-leaning groups across the country bring Shapiro to their campuses all of the time. Would a left-leaning group ever extend an offer to Shapiro? If an auditorium was filled with leftists who would allow Shapiro to speak, he would be there in a heartbeat.

If Coaston wants to have a "real debate" as she encourages, she should send Shapiro another email about setting up an event. He wouldn't turn it down.