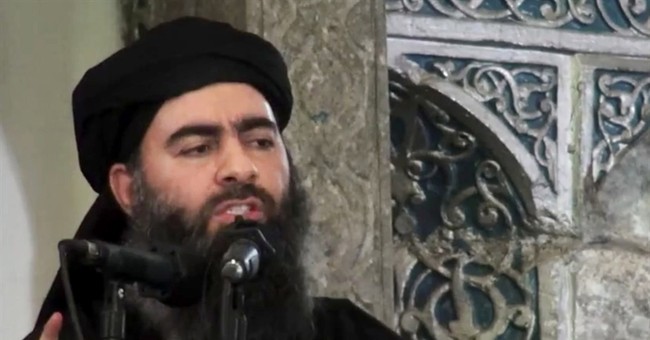 The Associated Press has reported that a new audio recording of Abu Bakr al-Baghdadi was released by ISIS on Thursday.

The new recording comes three months after Russia claimed to have killed Baghdadi in an airstrike. Baghdadi's death has been reported several times, but each time his death has not been confirmed with certainty. In July, Russian officials backed away from their claim that they had succeeded in killing the terrorist leader.

Osama bin Laden evaded the United States military for over a decade until SEAL Team Six entered his compound in Abbottabad, Pakistan in May of 2011. Baghdadi is another bin Laden-like terrorist. He appears to be often moved or be found just to disappear. Or he escapes by the skin of his teeth. The nation's forces that ultimately take him out needs to ensure he comes back in a body bag. If not, ghost stories and rumors will continue to persist.

Even if Baghdadi is still alive, ISIS is on the defensive as the Iraqi military is closing in on the last holdouts of the declared caliphate. The recording, even though a date is unknown, appears to be real, as Baghdadi addresses the increasing tension between the United States and North Korea. Newsweek notes, "The mention of Mosul indicates that the speech may have been created in the months following the group’s defeat in the city in July."

Hopefully, U.S. forces or Iraqi forces will find him soon. Like every terrorist to come before him, Baghdadi will eventually run out of time.

Russian officials said in June there was a 'high probability' that al-Baghdadi died in a Russian airstrike. https://t.co/hkiuYA1ckH