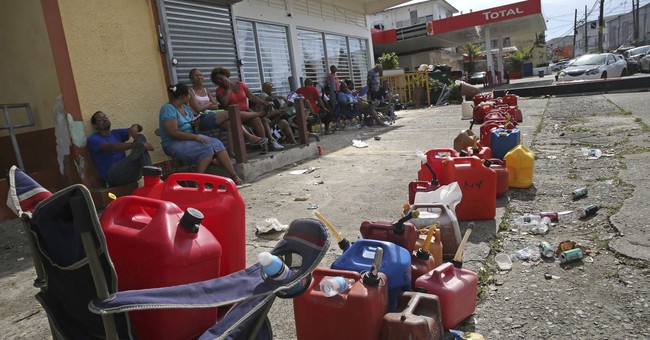 This weekend the entire country seemed to be focused on President Trump's Friday night rally for Alabama Senate candidate Luther Strange, along with the president's tweetstorm calling for players of the National Football League to be fired for kneeling during the national anthem. Sunday fueled the fire even more as there was non-stop coverage of athletes protesting the president league-wide. While this story continues to soak up media attention, a potential humanitarian crisis is underway in the U.S. territory of Puerto Rico.

The small island has been ravaged by back to back category five hurricanes and the American citizens there could be without power for a series of months. Hurricane Maria alone left three million people without electricity.

Hundreds of people have flocked to the San Juan airport to try to get back to the States. The airport is without air conditioning, and no food or water is being brought to those waiting. Due to the loss of power, stores typically seen in airports are closed, and people are unable to withdraw money from ATMs.

CBS News' David Begnaud traveled to Puerto Rico to report on the ongoing crisis. As Begnaud states, it is not just food and water that people need. There are those who need medical attention, like blood thinners and dialysis.

"It's inhumane" what's happening at the airport in San Juan, a nurse from Little Rock, Arkansas told me - they need food, water and fans. pic.twitter.com/Fcm3QBiMVB

Begnaud describes the airport as a sweatbox and speaks to a woman by the name of Mary who has been at the airport for three days. Her flight out has been canceled twice, and she talks about a rumor going around that someone died in the airport. As Begnaud continues to walk outside, he shows hundreds of people lined up outside of the Jet Blue terminal.

More from inside airport where it's a sweat box pic.twitter.com/KD5Ucn03Mq

Puerto Rico Governor Ricardo Rossello spoke with Begnaud who asked the Governor where the much-needed aid is coming from and when it will arrive. Governor Rossello also made a few requests from those in Washington, D.C.

I would like to ask Congress, and the American people in general, to help avoid a humanitarian crisis in the United States. Puerto Rico is part of the United States. And if we do not take proper action because of the crisis in the mid to long-term, this is going to be a real problem. Here are some things you need to know. Number one, we are proud U.S. citizens.... Number two, the magnitude of this, having two category five hurricanes back to back coming in Puerto Rico is unprecedented. Anywhere, anywhere in the world. So the devastation has been severe and people need to understand that this is a major, major disaster.

"I've ordered food and snacks to be delivered to the airport," the Governor just told me #SanJuan pic.twitter.com/WLBrS03twV

FEMA tweeted out that supplies are on the way and that over 10,000 federal staff are doing everything they can to help the people.