Spicer Potentially in Crosshairs of Mueller 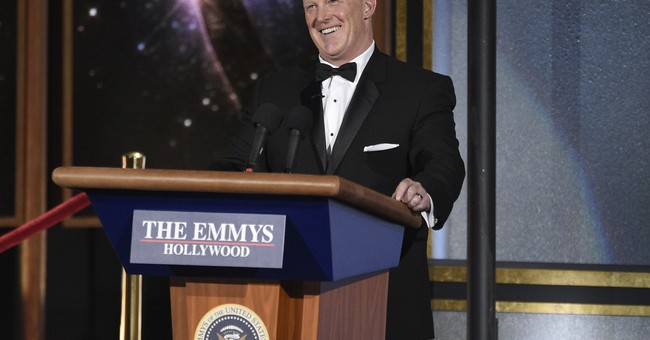 News broke on Tuesday that Special Counsel Robert Mueller has obtained new information from wiretaps of Paul Manafort, one of President Trump's former campaign advisers, during his Russia investigation. Those reports opened up several new questions and once again revived interest in the narrative that President Trump's campaign colluded with the Russians during the election or campaign members had undisclosed ties with foreign nations. But now, from the reporting of Axios, former Press Secretary Sean Spicer may now be in the hot seat.

Now we can tell you about another potential honey pot for Mueller. Former colleagues of Sean Spicer tell Axios that he filled "notebook after notebook" during meetings at the Republican National Committee, later at the Trump campaign, and then at the White House.

When Spicer worked at the RNC, he was said to have filled black books emblazoned with the party's seal. Spicer was so well-known for his copious notes that underlings joked about him writing a tell-all.

If Spicer's colleagues are telling the truth about his notebooks, there could be some damaging information in there. What that information could be, no one knows. According to an anonymous White House official that spoke with Allen, "[Those in the White House] are going to wish they'd been nicer to Sean. … He was in a lot of meetings."

Sean Spicer has been back in the media spotlight as of late with his appearances on late night talk shows like Jimmy Kimmel and award shows like The Emmys. During his time as press secretary, Spicer quickly came under fire from the mainstream media and was lampooned by the cast of Saturday Night Live for how he handled White House press briefings and relayed information to the public. Spicer resigned from his position as White House Press Secretary in July after President Trump appointed Anthony Scaramucci to be the next White House communications director (Scaramucci only held the position for ten days).

In Axios's article, Mike Allen explains that he has known Sean Spicer and his family for over a decade. Allen decided to send Spicer a text message to try to see if Spicer had a response to the information that the sources had relayed. Spicer had this to say:

After Allen replied with a question mark, not fully understanding why Spicer was defensive, Spicer shot back with another text:

"Not sure what that means. From a legal standpoint I want to be clear: Do not email or text me again. Should you do again I will report to the appropriate authorities."

Sure, reporters and people who are trying to confirm reports that they get from sources can be obnoxious, but this would have been a good time for Spicer to get out ahead of a potential breaking story if the sources are not telling the truth. It is quite easy to say whether the notebooks do or do not exist and what kind of information they contain (i.e., talking-points, the President's agenda for the country, what the media is reporting, etc.). Robert Mueller is still conducting interviews with current and former White House staff. Time will tell if Spicer is one of those individuals to be interviewed and if his detailed notebooks will become a larger part of Mueller's investigation.