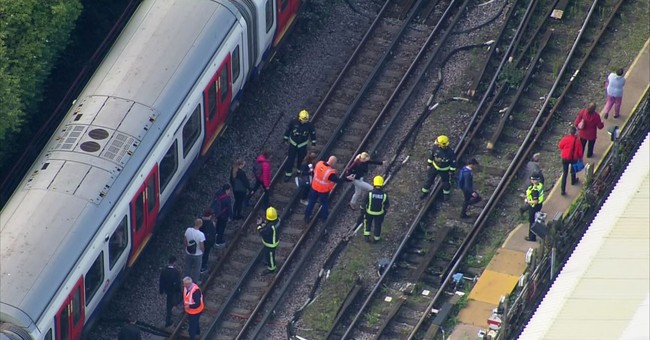 UPDATE: ISIS has claimed responsiblity for the attack

Europe has been hit with yet another terror attack. This time around, a terrorist used an improvised explosive device (IED) on one of London's metro rails.

An attack like this, however, should not come as a surprise. Those wishing to bring harm to the Western World told everyone this was going to happen.

Last month, Al Qaeda in the Arabian Peninsula's (AQAP) magazine Inspire, called for its radical followers to target metro lines in the United States and Europe. It appears that sympathizers may have taken their advice, almost to the letter. Though at this time, no terrorist group has taken responsibility for the attack.

According to Business Insider, AQAP's propaganda magazine stated that a train attack is not meant to be a "martyrdom op," which explains why British police have now identified a suspect. What is the reason for it not being a martyrdom operation? It is because that same terrorist can live another day to make another bomb. As Inspire explains, the perpetrators of this horror can repeat it.

Robert O'Neill, the man who killed Osama Bin Laden, was on Fox News with Shannon Bream last month to discuss the threat. While the threat is not a new one, it may be exploited in the coming months as metro lines are, by definition, "soft targets."

During the interview, O'Neill stated that Al Qaeda is looking for the "spectacular hits" and that they are "playing the long-term game." O'Neill also went on to say that Al Qaeda is beginning to see the effectiveness of lone-wolf attacks, and they are looking at bigger targets, like metro lines, as they know if they can derail one it will significantly affect the way the country operates.

AQAP specifically called for attacks in countries like Britain, France, and the U.S., and someone out there either had the same idea or was listening.

The question Europe and the United States have to answer now is, how will they respond? Prime Minister Theresa May's first reaction was to criticize President Trump for calling this an act of terrorism too quickly.

JUST IN: Theresa May tells Trump not to "speculate" on London terror attack https://t.co/DKKCQ7MKvz pic.twitter.com/te4OELDnI3

Europe has faced several terror attacks in recent months, and it looks like they will continue. In the last few attacks, terrorists have used vehicles to run over pedestrians in areas with heavy foot traffic. Now metro lines are just another concern for Europeans to add to the list.

In places like Washington, D.C. and New York City, there are thousands of metro riders every day. What happened in Europe could very well happen in the United States. But in times like this, it is important to be aware of one's surroundings, report any suspicious activity, and remain vigilant.