When the Atlantic Coast Pipeline Was Canceled, Both Sides Lost 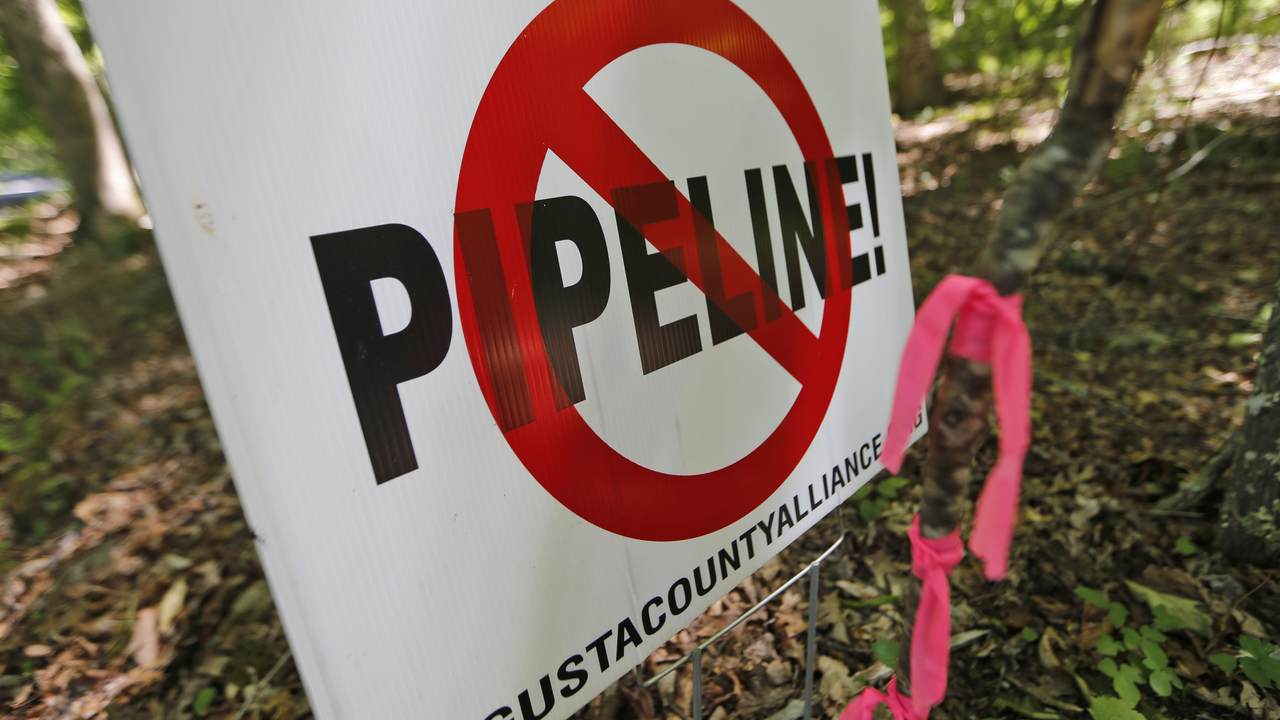 In May 2014, Marvin Winstead received a letter alerting him of plans to lay a natural gas pipeline that would slice through parts of Virginia and North Carolina, where Winstead’s family had lived for seven generations. Primary stakeholders Dominion Energy and Duke Energy requested to survey the 70-acre sweet potato farm Winstead had inherited from his father for what they called the Southeast Reliability Project.

Winstead knew what pipeline construction would do to more than 11 acres of his property. Clear a swath of trees 1,100 feet wide—enough to lay a major highway—strip away the topsoil, dig a trench in the layers of clay below, fill with gravel and spread the topsoil over the crater, a façade of productivity concealing a nonnutritive core.

A large section of the project, renamed the now-canceled Atlantic Coast Pipeline, ran through what are historically some of the poorest areas in the country. Rural Appalachia has seen growth in recent years, but still has a poverty rate of 15.8 percent as of 2018.

Paul Saulstrom, late professor of History at Saint Mary-of-the-Woods College, argues in his book “Appalachia’s Path to Dependency” that New Deal programs and poor stewardship of natural resources trapped Appalachian communities within the body of an adolescent economy. Government assistance prevented it from the independence and market forces it needed to learn how to function autonomously.

But mega agricultural firms displaced the hundreds of individual growers who used to cultivate tobacco in the area. Textile production migrated to Southeast Asia. Coal companies exploited people desperate for employment. Debilitated by overconsumption, of both the environmental and economic variety, and emigration, many Appalachians have fallen prey to the designs of large corporations eager to capitalize on the region’s rich natural resources.

Duke Energy supplies most of the utilities in North Carolina. Dominion Energy is the primary supplier in Virginia. And Federal Energy Regulatory Committee rules guarantee up to a 14 percent rate of return on new investments.

“Its costs were going to be entirely offloaded onto captive ratepayers,” says Greg Yost of Mars Hill, NC, and a member of the North Carolina Alliance to Protect Our People and the Places We Live. “The benefits, such as they were, would flow only to the executives and shareholders of Duke and Dominion, not the people of WV, VA, and NC who were expected to sacrifice their money, safety, and property.”

“Impacted landowners along the proposed ACP vigorously rejected the idea that they should sacrifice the market value of their properties for a transmission pipeline … which would do neither them nor their communities any good,” says Yost.

A report by Sarah Taber, an industrial and agricultural consultant who spent six months researching the pipeline, found no reason to trust Dominion’s claims that the ACP would revitalize the decrepit economy.

Residents say demand for natural gas is, if anything, contracting. Natural gas prices in Virginia have steadily declined after peaking in the late-2000s, although they remain higher than the U.S. average.

But consumption has skyrocketed, with no indication of a plateau if the trend persists. PJM is the company responsible for coordinating the mid-Atlantic electric grid. It publishes company and zone-specific electric load forecasts each year. While last year’s report predicted only moderate energy demand increases within the Dominion Virginia Power Zone, covering most of Virginia and some of North Carolina, this year’s predicts marked increases.

Still, shareholders struggled to push the ACP into existence.

Winstead and others refused to grant easements in spite of what he calls Duke’s “underhanded” efforts to pressure landowners. They set up Q&A’s, but to those who protested easements, the answer was always, “You’re just one person. This is the best offer you’re going to get, so you might as well be happy with it.”

Winstead recounts how Duke staged public hearings at municipality centers that were “something of a joke.” Then Duke revised the format, whisking witnesses away to give testimony in private.

“I felt bullied the whole time,” says Winstead. “They made people think they didn’t have any recourse.”

Duke and Dominion encountered more judicial and regulatory hurdles than they expected.

“They thought they had a lot of permits in the bag, so to speak,” notes Winstead. But they didn’t.

Earlier this year, the Virginia legislature passed the Virginia Clean Economy Act requiring the state to reach net zero carbon emissions by 2045, pressing Dominion to revise its local agenda. Dominion’s new Integrated Resource Plan (IRP) included commitments to add a minimum of 16 gigawatts of solar, five gigawatts of offshore, and 2.7 gigawatts of storage, while retaining 10 gigawatts of natural gas over the next 15 years.

“The thing that’s really so distressing is that natural gas is the reason we’re reducing our carbon emissions,” says Committee to Unleash Prosperity founder Steve Moore.

Republicans claimed the plan minimized the gains that could be made through maximizing energy efficiency, while Democrats criticized it for its anemic approach to reducing emissions.

Coal can go, says Dominion. But natural gas will have to stay, not only to finance the new wind and solar infrastructure, but to ensure energy reliability for consumers. Consumers will have to pay the price: monthly utility bills could rise by as much as $46 by 2030.

Without the natural gas function in Virginia, Dominion would have to increase its grid transmission capacity to import more natural gas from outside the state.

Unconvinced by promises of jobs—most of which would be temporary or come from skilled, out-of-state labor—Winstead and others suspect that Duke and Dominion’s true designs for the ACP involved exporting, not importing, natural gas.

Winstead says Duke “had to create that narrative” of economic development to justify what otherwise served as a short-term money grab.

Dominion had received a permit to transform its Liquid Natural Gas facility in North Carolina into an export facility. And as shareholders sought permits to construct the ACP, they announced the addition of a spur directed toward Virginia Beach.

In late 2019, the U.S. became a net exporter of petroleum products for the first time, and the U.S. Energy Information Administration predicts global natural gas consumption will rise 0.5 percent by 2050, even as other sources increase.

After OPEC, whose members include Iran, Russia and Venezuela, consolidated power over prices for oil, natural gas’s fossil-fuel sibling, in the 1970s, prices increased 400 percent in six months. The U.S. and OPEC jostled for price stability, but while OPEC could manipulate production capacity, the U.S. continued to suppress exploration and development. That is, until the early 2010s, when analysts say hydraulic fracturing, or “fracking,” allowed the U.S. to reduce its dependence on imported oil from the Middle East.

“People don’t really talk about that,” says Steve Milloy, a member of the Trump EPA transition team. “Iran is not really important now from an oil perspective. None of the OPEC countries are.”

Moore says the OPEC countries stand to profit the most from increased restriction on the U.S. fossil fuel industry. “They would love nothing more than for American environmental groups to shut down” natural gas infrastructure in the U.S., he says.

Of course, no one expected the coronavirus. Expenditures for the joint venture had inflated from $5.1 billion in 2015 to $7 billion and climbing in 2019. COVID-19 became the final incriminator to an already weakened and incendiary project. Duke and Dominion announced the ACP’s termination on July 5, 2020.

“This announcement reflects the increasing legal uncertainty that overhangs large-scale energy and industrial infrastructure development in the United States,” company CEOs said in a statement.

Courts also assaulted two other major pipeline projects—the Dakota Access Pipeline and the Keystone XL extension—shutting them down and striking energy companies with grave financial setbacks at a time when even industry giants can afford less than a pipeline’s width of error.

The Trump administration has enacted a slew of environmental deregulations, however, meaning legal uncertainty regarding infrastructure and other projects that have the potential to incur environmental damage is actually decreasing.

“It was totally out of control,” Trump said at a press conference.

Trump seems to think the environment is not as sensitive to human activity as some would suggest, but the macro-economy is, and it needs protection.

Those who live along the proposed pipeline paths want most to protect what lies outside their front door: their land, health and communities. They won’t relinquish personal treasures to hegemonic corporate interests.

To Yost, the plan represented “only further debasement of our government as an accomplice of Russian-style oligarchic mismanagement, incompetence, and kleptocracy.”

Either way, Atlantic Coast Pipeline or no pipeline at all, the communities of rural Appalachia bear the heaviest cost.