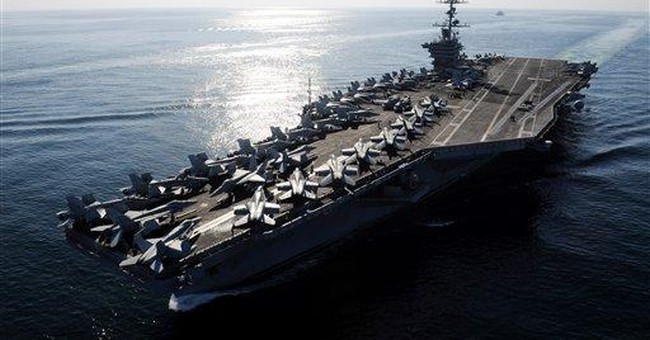 Iran staged attacks on a diminished replica of a U.S. aircraft carrier into the Straits of Hormuz in the “Prophet Mohammad 14” military drills on Tuesday.

A spokesman for the operation told the IRNA, a state news agency, that exercises involve navy and aerospace forces and are “aimed at safeguarding air and sea lines, continuing supports, and readiness for every scenario.”

On Monday, a tugboat maneuvered the vessel into position. It floated in contested waters for a day while the U.S. and other nations speculated over Iran’s intent. Roughly 20 percent of the world's oil output passes through the Straits of Hormuz on its way to export destinations across the globe.

Fox News reports that the Iranian ship is roughly 650 feet long and accommodates 16 fighter jets, while the authentic vessel is over 980 feet long.

Footage broadcast on state television depicts paramilitary IRGC troops descending from helicopters onto the vessel while speedboats circled in a mock attack. Later, land and aerial assault vehicles fired missiles at the ship. Related footage does not clearly indicate the moment of impact, but at least one warhead skims the water before detonating just in front of the vessel and another shot depicts smoke streaming from the vessel’s side.

“The country will not attack any state,” he said, “but it is quite aggressive in tactics and operations.”

He also noted that Iran has recently augmented the quality of its military infrastructure, so the drill is an opportunity to test the equipment’s effectiveness.

Cmdr. Rebecca Rebarich, a spokesperson for the Bahrain-based U.S. Navy’s 5th Fleet, said the U.S. was aware of Iranian posturing in the straits but the war games had not interfered with commercial activity.

“The US Navy conducts defensive exercises with our partners promoting maritime security in support of freedom of navigation; whereas, Iran conducts offensive exercises, attempting to intimidate and coerce,” Rebarich told The Associated Press.

Prophet Mohammed 14 appears to be a reiteration of similar drills conducted in 2015, then dubbed Prophet Mohammed 9. Iran dispatched a mock-U.S. warship in a “message of [Iran’s] might” to “extraterritorial powers,” said the Guard’s former commander, General Mohammad Al-Jafari.

The 2015 exercises preceded the deadline for UN leaders to establish an agenda for Iran’s nuclear program by a few weeks. President Trump formally abrogated the agreement in 2018, but retained an arms embargo included in the agreement. That embargo is set to expire in October.