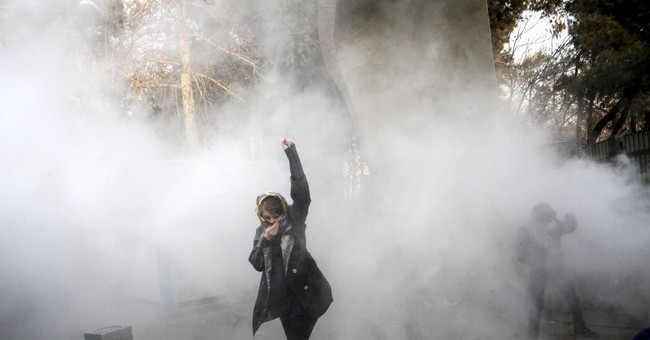 The world celebrated as the Iranian supreme court commuted the death sentences of three protesters, but Iran continues to uphold execution for anti-regime demonstrators. On Sunday, the court upheld the death penalty for five men who were arrested for participating in the 2017-2018 protests in Khomeini Shahr, Isfahan.

“We condemn the use of executions as a means of repressing protesters and creating fear in society,” said Iran Human Rights Director Mahmood Moghaddam. “We call on the international community to put pressure on the Iranian authorities to stop these executions.”

“Corruption on earth” is described in article 287 of the Islamic Penal Code of 2013. It includes “anybody who commits a crime on an extensive level against domestic security or external security,” including what the regime determines as extreme political resistance. Article 286 prescribes death as the punishment for rebellion and vaguely-defined “offenses.”

Iran Human Rights has confirmed that each prisoner suffered torture intended to compel them to make false confessions.

Iranians inside & outside the country joined to mobilize people across the globe to stay execution of 3 innocent young men who protested for freedom of all. Now regime has sentenced 5 more peaceful protestors. Join us to secure their freedom! #StopExecutionsInIran #???_????_????? pic.twitter.com/LHOAy9bcVz

Earlier this month, Iran Supreme Court’s decision to execute three men arrested during protests in November 2019 generated a viral social media crusade, with people across the globe tweeting #?????_????? (“do not execute” in Persian).

The hashtag multiplied over the next 48 hours to reach six million retweets, hitting 12 million by the end of the week.

“An unprecedented "storm" of tweets to condemn the death penalty for the three young man erupted on Twitter with the hashtag "Stop Executions In Iran" reaching a record of 8 billion views and five million retweets.#StopExecutionsInIran #???????????https://t.co/GkcdXvl8IE

While many hailed the campaign as a success, the prisoners’ immediate circumstances have changed little. The Iranian Supreme Court agreed to postpone the executions indefinitely pending further review of the cases per each convict’s request.

A UN Special Procedures group found that Iranian authorities tortured them men while in prison, eliciting confessions in return for medical treatment, which was subsequently denied. At first the regime withheld access to lawyers, then provided court-approved attorneys who gave insubstantial defense.

The retrial permits lawyers chosen by the three men to examine court papers and understand the litany of evidence against their clients, a privilege previously denied.

“This case is not an isolated incident. There are widespread reports of arbitrary detention of protestors and torture to obtain false confessions. Other individuals have also reportedly been imprisoned and possibly sentenced to death for their participation in the protests," UN experts stated.

According to the Cornell Center on the Death Penalty Worldwide, Iran commits the second-highest number of known state executions in the world behind China. Most executions occur by hanging. At least 137 prisoners have faced the death penalty in 2020 to date, and 273 were killed last year at a minimum.

“The actual number of executions is likely to be higher given the government’s underreporting of executions and the holding of secret executions,” the website states.