Kosovo President Indicted for War Crimes Ahead of Peace Talks 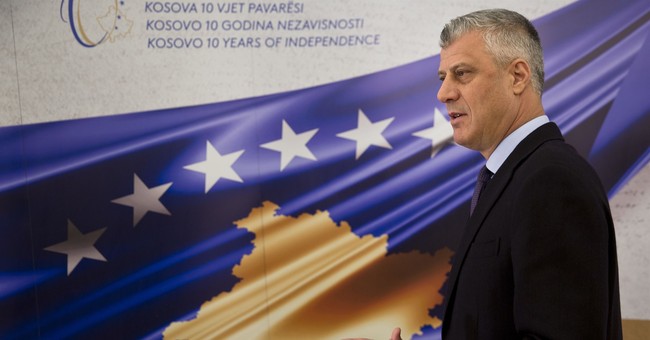 The Hague-based Specialist Prosecutor’s Office (SPO) released a statement on Wednesday announcing the indictment of Hashim Thaçi, president and former Prime Minister of Kosovo, along with nine other former insurgents. They face counts of war crimes and crimes against humanity, including nearly 100 murders.

President Trump had invited Thaci and Serbian President Aleksandar Vucic to engage in normalization sessions in Washington on the 27th.

“This White House opportunity opens the door to new economic development and investment. The U.S. hopes leaders in Kosovo and Serbia will seize this chance to return to dialogue and begin a new era of stability and prosperity,” Richard Grenell, the Special Presidential Envoy for the Serbia and Kosovo Peace Negotiations, said in a statement.

But following the SPO’s announcement, Thaci canceled his trip. Originally, Kosovo’s Prime Minister, Avdullah Hoti, planned to attend the meetings in Thaci’s stead, but on Thursday he too canceled. Grenell said of Thaci, “I respect his decision not to attend the discussions until the legal issues of those allegations are settled.”

Ethnically-based animosity between the Kosovo and Serbia has not resolved since the Kosovo conflict that began in 1998. Nestled between Albania and Serbia, Kosovo was effectively an autonomous province of Serbia despite its majority-Albanian population. Rebels in Kosovo formed the Kosovo Liberation Army (KLA) and began attacking Serbian police and politicians. When Serbia responded with what later was classified as ethnic cleansing and resulted in the creation of approximately 1 million refugees, NATO intervened and imposed a peace agreement that forced Serbia out of Kosovo.

Thaci, a former KLA official, declared Kosovo’s independence in 2008 and became its first political leader. He now serves as president.

A 2010 Council of Europe report accused Thaci and others of abductions, trafficking, executions, and other human rights abuses. Thirteen Serbian, Yugoslav, and Albanian officials were tried by the UN’s Yugoslav war crimes tribunal that lasted between 2005 and 2012, but Thaci has evaded official charges until now. Nevertheless, the majority of crimes were committed by Serbia.

Institutional agendas also motivated legal action against Thaci. The Kosovo Specialist Chambers (KSC), who cooperated with the SPO to file the indictment, alleges that Thaci has deliberately subverted the authority of legal institutions to convict political criminals. According to the SPO statement, “Mr. Thaci and Mr. Veseli are believed to have carried out a secret campaign to overturn the law creating the Court and otherwise obstruct the work of the Court in an attempt to ensure that they do not face justice.”

In a leaked denial of Thaci’s request that the U.S. interfere in the Court, Secretary of State Mike Pompeo allegedly argued that any change would “seriously infringe Kosovo’s credibility in the world.”

Independent analyst Agron Bajrami told AP reporters, “It will be very difficult for him (Thaci) to continue acting as a president, if not for anything else but for the fact that he cannot be part of the dialogue now that this has occurred.”

Charges against Thaci have not yet been confirmed.