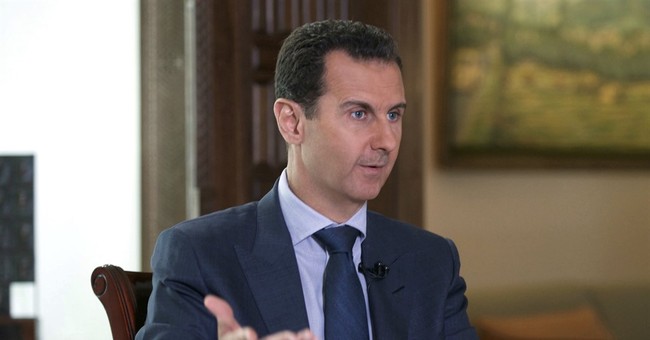 "Fake news" is a term that has been lingering on all of our news feeds lately; it appears that Trump has popularized it so much that now it's becoming an excuse for not-so-excusable people.

Syrian President Bashar al-Assad happens to be one of those people. In response to allegations from Amnesty International of torture and mass killings in a military prison just outside of Damascus, Assad defended his honor in a Yahoo News exclusive declaring that the "fake news era" we are currently in is responsible for said allegations. Although, he did declare that the execution of prisoners is a component of Syrian law.

“You can forge anything these days,” Assad said when asked about a new Amnesty International report estimating that between 5,000 and 13,000 prisoners were killed in a “calculated campaign of extrajudicial execution” at a military prison outside of Damascus between 2011 and December 2015. “We are living in a fake news era.”

Assad went on to dismiss photographs of numerous political prisoners, "depicting rows of emaciated, brutally beaten bodies of detainees," according to the  Yahoo News exclusive. Initially, Assad proclaimed that they were photoshopped--but was then presented with an analysis from the FBI upholding that the photos were, in fact, real.

In the 34-minute interview, Assad also blamed the emergence of ISIS on the United States.

In Assad’s account, Syria’s civil conflict — which American officials blame on his brutal suppression of protests during the Arab Spring demonstrations of 2011 — resulted from American and Saudi support for a rebellion that was hijacked by Islamic extremists. “So, who supported ISIS?” he asked. “We didn’t create it. You created it — the United States created all this mess. Who supported the rebels and called them ‘moderate rebels’ while they became ISIS and al-Nusra in Syria? We didn’t. So, it’s not a conspiracy. These are facts, this is reality.”

In relation to the new American administration, the Syrian president started off with the fact that he commends Trump's comments about fighting terrorism and finds them "promising." After further commending Trump's refugee policy, stating that there were "definitely" terrorists among the many refugees, he issued a warning to the U.S.

Assad warned the Trump administration about placing new troops inside Syria to fight the Islamic State without his approval and rejected an idea advocated by Trump for “safe zones” in his country. The proposal, he said, was “not a realistic idea at all.” He did hold out hope for cooperation with the Trump administration, but only following “a rapprochement between the Russians and Americans.”