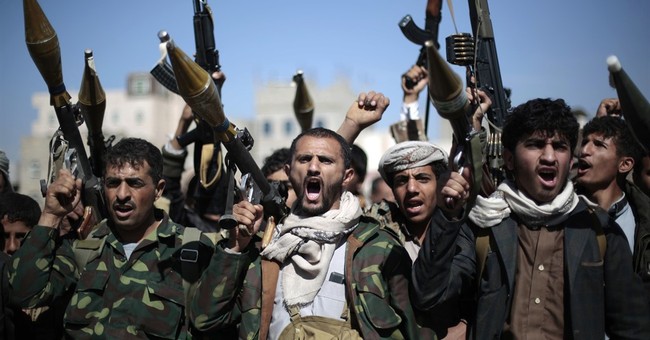 Just days after President Trump’s immigration and refugee executive order was signed, an attack by Iran-backed Yemeni Houthi rebels occurred Monday in the Red Sea off the coast of Yemen. Although it wasn't a U.S. warship that was targeted, the attack, now presumed by U.S. intelligence to be a suicide mission, was carried out against a Saudi frigate. Two Saudi sailors were killed, while three were wounded.

In this video taken at the scene, FoxNews reported that the voice is shouting in Arabic, "Allahu akbar [God is great], death to America, death to Israel, a curse on the Jews and victory for Islam."

It is thought by American officials now that the attack may have been meant for an American warship. According to FNC, the Saudi frigate was in relatively the same spot as U.S. warships were they came under attack via missiles in October.

The Associated Press has reported that just after this attack, Iranian president Hassan Rouhani has spoken out against Trump’s latest immigration actions on Iranian state television.

Rouhani described Trump and his administration as newcomers who don't understand politics, saying, "A man had been living in another world and now has entered the world of politics." Rouhani also said that Trump would end up harming not only his own nation but other countries as well.