Reoccurring Violent Protests Hurt Rather Than Help Liberal Cause 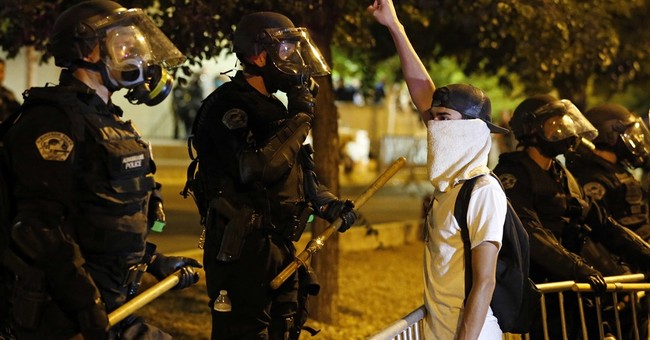 Throughout the election, liberal followers of both Sanders and Clinton have gradually engaged in violent protests. Last week, San Jose saw the worst of these protests.

In addition, CNN caught many of the protesters punching and throwing eggs at Trump supporters. Today, reports identifying four men facing arrest for the violent acts from the protests surfaced from San Jose.

While these protests have the intention of providing a message promoting the Democratic Party over the Republican Party, they often do the opposite. What better way to get your point across than to tip over a police car or throw eggs at people, right?

San Jose’s events were not the first of their kind. America also saw violence from protesters in San Francisco, Albuquerque and Costa Mesa in the past few months. Protesters were not only violent outside these rallies, some even went as far as assaulting a disabled Trump supporter, according to the Associated Press.

This amount of violence disrupts Americans’ right to assemble and brings fear into those who may have different opinions than the mainstream. America has built its foundation on the freedom to express opinions and we are quickly seeing that disappear.

These events are obviously not the first violent protests America has ever seen, as we remember the famous Civil Rights and anti-war protests in the 1960’s and 1970’s. The difference between these historical events and modern liberal protests is the hypocrisy. People of the Democratic Party have been preaching for months that Donald Trump is the agent for violence.

Clinton says Trump has created an environment where this kind of behavior is acceptable, however his recent comments on the matter are strictly reactionary.

“We wrapped up, everybody was cheering like crazy, and they walk out and they get accosted by a bunch of thugs burning the American flag,” said Trump, according to Washington Post reporters Jose A. DelReal and Sean Sullivan.

Violent protests have only been growing. Even leaders of the party have discouraged their supporters. “It should all stop,” said Clinton to CNN regarding the protests. “It is not acceptable.”

It is important to remember the election process is still in the primaries. These protests will only grow throughout the general election.

These violent actions give a bad reputation to the liberal party, associating them with hate and violence. If this irrational and hateful behavior continues to grow at the rate it is now, the Democrats will keep losing independent votes.

The passions against Trump run deep, but the radical actions coming out of those passions may push him into office.